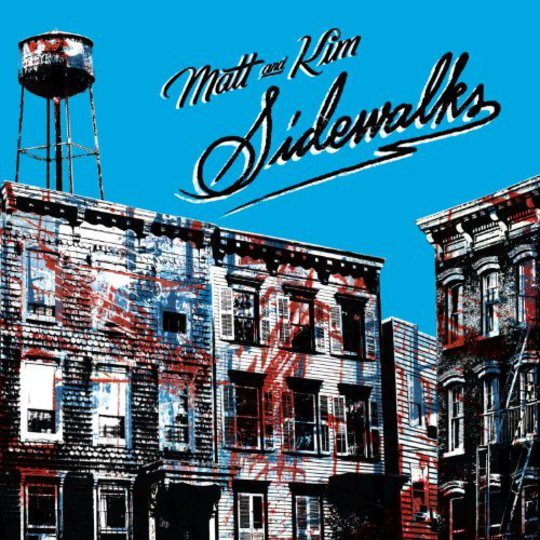 Even when you put their actual music to one side, Matt and Kim still exude a charming likeability. It’s hard not to watch their video for ‘Lessons Learned’ – a video in which they dodge cops and shock onlookers by stripping nude in the centre of New York – without at least cracking a grin. It’s similarly difficult not to be infected by their on-stage enthusiasm: fist pumping and flailing dancing commenced before a single note was played when I last saw them. So before I even sit down to listen to a Matt and Kim record in full, I’m just naturally disposed towards liking it; naturally inclined to just have a good time with Matt and Kim.

This is an inclination which Matt and Kim seem eager to entertain. The opening track on Sidewalks – and indeed, most of the tracks after that – explodes into life on a riff of lightning synth lines and straightforward beats. It’s a hyped up rush of background "YEAAHH!"s, tempo changes (always accelerating, never slowing) and deliciously simple (and hence catchy) chorus refrains. These are songs that you can join in with by their second chorus, never mind your second listen. It’s as if Matt and Kim are on the quest for the impossible: the song you know all the words to without even having to hear it. They once made a chorus of “yeah yeah, yeah yeah yeah yeah yeah yeah” – good enough. But with ‘AM/FM Sound’ they refine simplicity even more; using the noise “ey-oh, ey-oh, ey-oh” to bring their audience into the bouncy sing-along with no impediments whatsoever.

The problem with this formula, however, is that it’s one that doesn’t necessarily translate to the home listening experience all that well, and this particular transition is not aided by the production techniques employed on this record. Down to their very band name, Matt and Kim’s likeability hinges upon a certain sense of literality and directness. The joy of their performance lies in their spirited manner of rushing through material with vigour; Kim battering the shit out of her drums as she flashes grins back and forth with Matt. Two people, two instruments. On Sidewalks, this dynamic is entirely lost, and Kim in particular feels undeniably absent. Most of these beats are electronic, sounding programmed and lifeless. The intimacy of the duo is entirely lost, and were it not for the clue in the band name, this could quite easily pass as the work of a solo act. And, indeed, it’s the song in which Kim is literally absent (‘Northeast’) which nearly derails the entire thing. Alone and beatless, Matt’s songwriting isn’t engaging enough to carry the duration of an entire track. Their strength lies in their united energy.

But Matt and Kim leave us on a high note, gathering momentum through the last few tracks, culminating in the album’s biggest chorus in the final ‘Ice Melts’. With its jerky-yet-regular rhythm, the thing begs to be jumped along with in collective rapture at a concert, so again the question is raised: does this work on record? The answer is, ultimately: not quite. Matt and Kim try to inject the party atmosphere of their live show into their recordings by way of clubby electronics and super-polished synth lines, all the while oblivious to the fact that their party-starting appeal lies in the distinctly human qualities of their music: the whip crack of battered snare; the minor fuck up of a wrongly hit note – all of which is lost in translation, somewhat dulling their otherwise vibrant pop songs. Nevertheless, the blueprints of a fun time are here; the melodic and rhythmic groundwork is all in place. All we need now is to have Matt and Kim bring this ruckus in person, rather than through the middleman of mp3.