Micachu and the Shapes and the London Sinfonietta 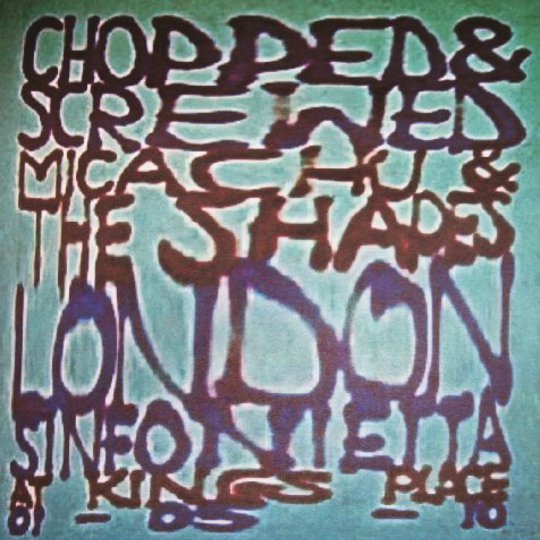 When Ari Up passed away last year it seemed that an extended moment might be passing with her. The Slits, The Raincoats, Essential Logic, The Bush Tetras, the experimental female led vanguard of post-punk still cast a long, cool shadow - but wherefore its rightful heirs? And then I immediately thought of Micachu. In the spirit of femme auteurship of those Seventies and Eighties artists she kicks over virtuosity, claiming the experimental mantle, working as shaker and scene-maker - it’s not that Mica Levi 'plays the man’s game' but that she comes at us 'post-man’s game', enervating, androgyne, pushing sexuality and gender to the back, but maintaining that same mixture of confidence and vulnerability as those first women. With The Shapes she released one of the albums of year in Jewellery, an extremely tidy mess, borrowing from the hardcore continuum to shower it with an utterly bizzaro notion of authenticism, cowbells, mellow percussion turned up to ADD inducing breaks, torn-up paper for pop hooks. Produced by Matthew Herbert, it prefigured The xx for a stark appraisal of urbanism but favoured the day-glo hassle and frenetic piecemeal over the long sheet-rain streets - it was totally restless, utter masterful, unique, and scandalously overlooked by conservative myopic awards lists that year.

But one thing it did, was garner her attention from that most ambivalent of places, the high arts establishment. Micachu may have started in the bedroom, basement and bashment, with grime tapes and MySpace, but somewhere on her crackling, magpie-like radar, high art was lurking. The Filthy Friends mixtape featured Simon Callow reading excerpts from Peter Ackroyd’s biography of London, and her collaborations with Herbert and love of the Californian composer Harry Partch meant she had the kind of mix - probably not hindered by her phantom femme lineage - to be approached in 2008 for a RFH concert with The London Philharmonic. And a year later she took the London Sinfonietta on her 2009 tour of Jewellery. So it’s not like she hasn’t done this kind of thing before. Chopped and Screwed comes as a collaborative work with the aforementioned Sinfonietta, whose Warp relationship has been interesting consistently interesting rather than ever essential. And while this goes out on Rough Trade rather than the Sinfonietta’s label, suggesting this might err more towards the pop end than the classical, Micachu appears happy to down guitars, plaster down quiffs, and get a little serious, taking up the role of composer full-on.

It’s hard to say what classical (or contemporary) forms emerge from this album - does the pop/classical interface still even hold? There are symphonic nods to the likes of Sibelius with the slow spacious lugubriosity, but always sliding towards modern dissonance. The closer 'Not So Sure' adopts strings in the manner of one of Stravinsky’s treacherous lulls, or the hyper-condensed orchestral swells which come later and also appear on 'Low Dogg' - cataclysmic clusterfucks of strings, brass and drums, which make James Chance sound like Pachabel and Wagner as limp as Brian May - all shot through the grape shot of Micachu’s trademark percussion. But as on the former’s use of wonky bagatelle accordian in the opening passage, the prevailing mood is the more folsky urban blight of Kurt Weill. Which is where we start the album with 'Unlucky', a slurred cabaret, Micachu’s plaintive voice doubletracked is given the sheen of haunto-chanteuse, and she carefully draws along the bum notes - plodding, measured and sweetly discordant.

'Everything' returns her ear for pop, and we get an absolutely fucking exquisite melody curling out over a madly propulsive set of muted, gouged-out instrumentation. Here the abetting of The Shapes playing home-made instruments (Jewellery's distinctive guitar sound came from her modified guitar 'chu') creates barely timbred rhythm, tapping and rushing, this incredible mixture of frantic energy and spare refrain. It’s like the haunted shell of some kind of mutoid power popper. If it didn’t sound so absolutely weird this could make somebody bigger than La Roux - an instant alt.club classic. But shrinking, reticent, all relentless awkward high-end with boxy and indistinct bass, it absolutely refuses to come to you, and coyness doesn’t begin to cover it. It’s like hearing the most sublime party next door, but knowing your neighbour thinks you’re the one pissing in their bins - all you can do is cock your head in longing.

'Average' takes that slightly depressive turn that Micachu does so well, which intensifies in 'Freaks' - kind of foggy, maudlin. Over the Sinfonietta’s rolling tympani for a moment we get a more traditional arrangement, slightly detuned strings saw away, reminiscent of John Cale, her voice is pitched into foreground space, and there is a trace of hamming, grandstanding, but swiftly returned by clever little detournes of percussion. On 'Low Dogg' she stands and gives it like MIA, or Nico demanding more heroin, but always with the vulnerability “twist my neck until I snap”.

The brief of the project, and the derivation of the title, comes from the chopped and screwed aesthetic of Southern hip hop’s turn in Houston of the Nineties, often credited to DJ Screw and the cough syrup narcotics that eventually offed him. Here the notion is to replicate the halved-tempo, time-bent, slowed and throwed aesthetic that Screw was applying to the fast beats - but using composition rather than technology to achieve it. And while no doubt this gives a framework to what Micachu may well have done anyway, guiding the slow tempos and sustaining the melancholy, the idea is perhaps slightly spurious. Less abstractly, the album will ship with a mixtape by collaborator Brother May, chopping and screwing the album back into a collection of grime tracks, which sounds promising. 'Medicine Drank' gives a performative spin on this. Lungy and wheezy through the fog, multiple hollow pipes like some kind of Radiophonic emphysema. Micachu actually sounds quite impatient uttering the words “slow motion” in a sort of mogadon ennui, but the track itself is like the hinterland of time, distilled nothingness, reminiscent of the heroin quietude of 'Chain Reaction'.

If Micachu deconstructed the pop song in the studio with Herbert, creating a fizzing pile of clacified bones, here she is more careful to build back up. There is flesh on her structures, measurement, she inhabits her styles more reflectively and gives herself more scope. Soon enough it might be difficult to talk about Micachu without using the word 'genius' - her attention to sound is incredible, her approach dementedly fresh. It would be a shame if this was left languishing in middle-brow territory, as one of those 'interesting' albums that rarely get dusted - it’s far better than that, a small and totally unpolished gem, sparkling and anti-lapidary. If we were so minded, we could also think that the likes up Ari Up left the world a better place than they came into it.