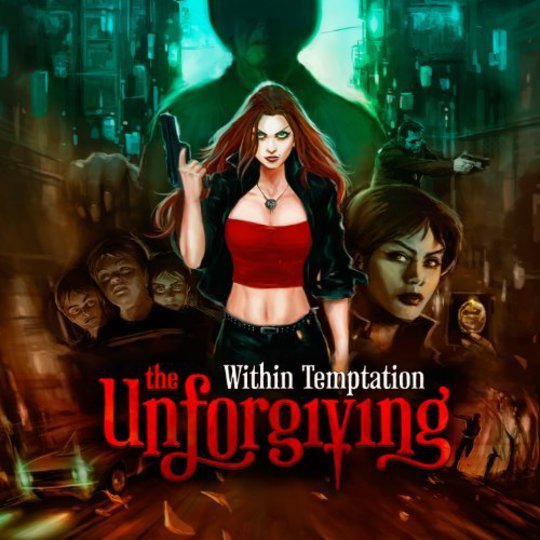 Back in 2003, a waxen beauty clawed her way up the side of a building, nightdress billowing, belting “Bring me to life!” And no matter how contrived, how tawdry its faux-goth-meets-nu-metal trappings, the mainstream success the song brought to Evanescence directed a flurry of attention on a myriad female-fronted bands, already well-known on mainland Europe, who had been around for longer and who, let's be honest, were always much better than Amy Lee and her grunting male counterparts.

Of these, Within Temptation have always been less power-metal orientated than Nightwish and Edenbridge and less gothic than Lacuna Coil and Epica, fitting neatly into the box labelled 'symphonic'. They’ve always also been the more commercially minded of the lot, unabashedly courting a metal-lite sound, and it’s clear that the massively hubristic concept surrounding the band’s fifth album The Unforgiving will only propel them further towards a mainstream eventuality. A concept album centring around ‘Mother Maiden’, a medium who recruits dead souls seeking repentance to help her defeat evil, each song was written alongside a comic book by Steven O’Connell (of BloodRayne fame) and illustrated by X-Men graphic artist Ramano Molenaar, to be accompanied by three short films.

Now of course metal isn’t adverse to demonstrations of grandiloquence in every form possible, and in a sub-genre well accustomed to the concept of the supernatural, Within Temptation’s latest project is certainly an attempt to take it to the next level. In the same way Lacuna Coil’s latest effort Shallow Life took them heavily into pop chorus territory, The Unforgiving is an infectious, slick as anything collection of songs that borrow heavily from the Eighties arena rock era and that really do stick in your cranium from the get go.

The omnipresent Eighties influence does, however, mean that for its duration The Unforgiving teeters tentatively on a tight rope constantly veering into cheesy territory. The Heart-esque ‘A Shot in the Dark’ is a prime example, Den Adel’s powerful voice at its most affecting, leading the way into a way over dramatised, yet anthemic chorus. “Your soul is on fire, a shot in the dark. Where did they aim for when they missed your heart?” she blares, and the whole thing would collapse under the substantial weight of cliché, Whitesnake-aping and superfluous polish, if it didn’t possess a melody so … memorable. ‘Sinead’ – a track dedicated to the comic-book protagonist and seemingly also to Foreigner - is the same, possessing a glossy veneer that swells with massive orchestration and an arena-sized pop chorus. Elsewhere single ‘Faster’ blatantly rips off Chris Isaac’s ‘Wicked Game’ (but ends up bearing more resemblance to HIM’s abhorrent cover than the original) while the galloping ‘In the Middle of the Night’ opens like twenty-times-less-metal Bullet For My Valentine track, but embracing distinctly cock-rock orientations. It’s certainly the heaviest thing the band have done since their debut Enter and the only time The Unforgiving really ever bites back, offers any punch, and strays into metal territory.

It’s often very impressive in its (faintly ridiculous) bombast, yet compositionally, these tracks never elevate beyond elementary and predictable, opportunities wasted with childsplay riffs and flat, insipid guitar solos – the worst perpetrator of this is the forgettable ‘Where Is the Edge’, which really could be taken as a literal question. Furthermore, it’s only on ‘Iron’ and ‘Stairway to the Skies’ that the band really flaunt a soupcon of the ethereal beauty and symphonic mysticism that they utilised to carve their own identity. And by eschewing it, we’re left with a distinct sense of genericness - save for Den Adel’s undeniably fantastic vocals you can’t help feeling that any number of bands could have made this record.

Yet all this is reading rather negatively and surveying The Unforgiving as a concise body of work that’s a little unfair. Because however cheesy, however smothered in Eighties patische, what Within Temptation have done is write a collection of killer melodies that are so strong it’s almost impossible to sniff at them. I just wish they’d done it with a little more of a personal flourish.