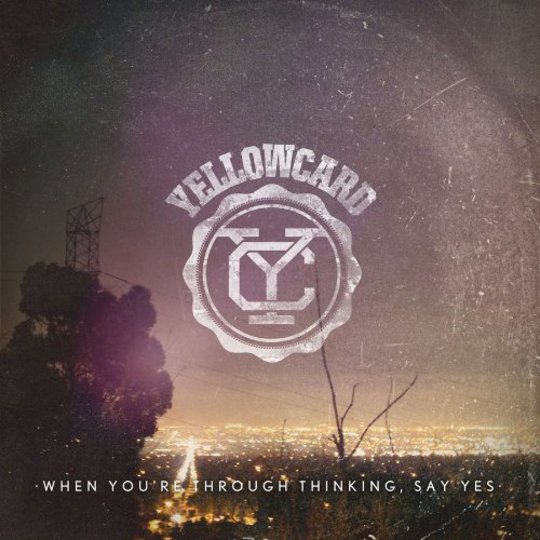 We all remember Yellowcard. They were that second or third (or fourth or fifth?) wave emo band with the blond-haired pretty-boy lead singer. No, not Saves The Day. After them, but before Madina Lake. That’s right. The one with the violin. You’d almost forgotten, hadn’t you?

Well, Yellowcard are back, and they’ve brought their violin back with them. On When You’re Through Thinking, Say Yes, the band’s seventh studio album (seriously – seventh), the formula is much the same as it was when ‘Way Away’ arrived on the MTV2 playlist back in 2003. The fiddle-playing is as trifling as ever. Like any good gimmick, it’s Yellowcard’s most distinctive feature, but only in the same way that Lee Ryan’s public stupidity is Blue’s most distinctive feature. On lead single, ‘For You And Your Denial’, the violin hurries out a bewitching melody, but its folky figure-of-eight pattern sits on top of fiery power chords as naturally as a novelty tie would rest on the chest of John Major. It’s out of place, trying to make Yellowcard out to be something they’re not. That melody should be getting spanked out of a detuned Stratocaster, not lifted from a Legend of Zelda soundtrack.

Elsewhere, on the slightly more sneering and altogether more punky ‘Life Of Leaving Home’, that violin is caught arbitrarily dual-ing with a lead guitar solo. It reminds you that Yellowcard come from a generation of bands that are often about finding the point in music where Morrissey meets Iron Maiden. For bands like Fall Out Boy and, in an earlier life, Brand New, this means straight-up, riffing rock songs balanced by sensitive and articulate lyrics with poetic aspirations.

On this record, Yellowcard cover all the same territory as those latter bands, with vague stories of broken friendships, frustrated romances and perfect summers that they’ll never get back. Because… you know… growing up, like… sucks. The lack of detail is the problem here. Without quoting at length, there are references to how “The rain falls down” and “Memories of the light in your eyes”. Compare this to being 14-years-old, hearing Taking Back Sunday for the first time and being warmed by the discovery that a band has made a record specifically about your life. Yellowcard don’t put words on those inexpressible teenage emotions. They might as well be singing about anyone’s life at any moment in time, using the same dull truisms that would fall into anyone’s journal.

The music itself is equally ordinary. There aren’t any of the theatrical climaxes that turn a crap day at college into an hour-long bedroom sobbing session with a simple key change. These choruses are unlikely to unite crowds of strangers, who otherwise might have bonded over never having met anyone else who’s memorised these lyrics.

Now, I’m fully aware that I’m no longer Yellowcard’s target audience, and if you have been touched by their music feel free to dismiss me as a grumpy old man. But I’m convinced that things really were better in my day, so do me a favour: try Your Favourite Weapon. Try Tell All Your Friends. Try Bleed American. If you’re really fed up, try Full Collapse. These albums articulate the muddle of not being a kid anymore, but not quite being an adult, far more precisely than When You’re Through Thinking, Say Yes does. They were made by bands who, unlike Yellowcard, will stick with you well into your old age.