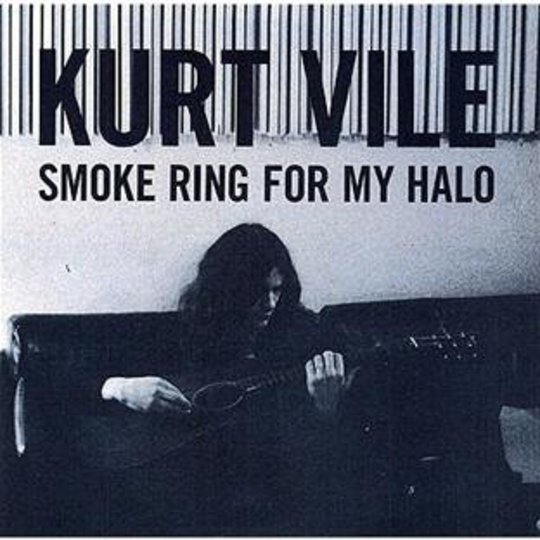 Kurt Vile. I mean, first things first, he’s got a cracking name. You know where you stand with a Kurt Vile; once you hear those words, you’re prepared to face the man lurking at the heart of this record - a man who had it all laid out, destined to be the grisly antithesis of Brylcreemed accountants and Sound of 2011 nominees from the day he spurted out of a Vile mother’s womb. And if you’re familiar with what precedes this - his fourth LP, second for Matador - you'll be aware that Kurt doesn’t just live up to his almost Dickensian moniker, he owns it. He harnesses every assumption made of its Vile association, barking, growling hard bitten laments, until the Vile name is intertwined with his music’s murky, musky drudge, and to experience one without the other would be to deprive a dog of its bark, or a sword of its sheath.

Smoke Ring For My Halo, then, takes a step back from the crystal clarity of last year’s Square Shells EP and retreats, drenched in washed-up reverb, to the coves of Matador debut Childish Prodigy. Although SS might have given us a slightly firmer idea of who Kurt Vile is - as well as an organic alternative to his usually dense, heavily affected recordings - his LPs are most poignant when backed by that homely hum, that lends them their bedroom authenticity.

The approach suits better than on shoddy ‘chillwave’ efforts elsewhere, because it presents the bedroom as a ‘chill-out room’, a place where we sit and listen to Kurt’s informal, chatty tales; rather than a ‘chill-out room’ where we get stoned and fall asleep on the couch at half nine in the evening (although I imagine you’d be more than welcome to smoke in Kurt’s room, too - long as you brought your own stuff, y’know).

And what better subject for the bedroom-dwelling artist to tackle than the perennial struggle of integrating your sorry self into society? Kurt observes that while the majority are granted a place in its hallowed ranks, to earn promotions and go to cocktail parties, losers are consigned to bedrooms and hospital wards; society’s cast as a sort of Pontius Pilate figure on Smoke Ring..., dividing its occupants into winners and losers with life-changing consequences. “Society is my friend,”, Kurt offers on the song of the same name, with short-lived optimism, “He makes me laugh/Down in a cold bloodbath...”. If society is Pontius Pilate, Vile’s at pains to let the world know his sentence.

To supplement this attitude, he’s got degenerative rock down too. His excellently-named band the Violators in tow, ‘Puppet to the Man’ struts with a blithely obnoxious gait, power-chord thunks abound - and unafraid to indulge in the occasional wibble - before Kurt’s lascivious snarl steals the show. “My sister’s stuck and she don’t think she can undo it/Sometimes I get stuck in a rut too it’s okay girlfriend,” goes one verse, before adding “Sometimes I’m in a rut so much I don’t want it to end”. Just so you don’t forget how shit goes down in Vileville. What makes ‘Puppet to the Man’ the consummate, head-crunching Real Fucking Deal though, is the flip to coda, upon which Kurt calls out, momentarily vulnerable, for a helping hand, a ticket out of his rut. “Sometimes I’m stuck in and I think I can’t unglue it/Will you help me do it?/Will you help me do it?/Will you help me do it?”. That repeats to fade, and it is awesome - reminiscent of the switch-up at the end of Elliott Smith’s ‘Christian Brothers’, which as you know, is the best sombre-folk song of the last twenty years. Probably.

I’d hesitate to call this thing ‘Rock n Roll for the bedroom generation’, but seeing as that seems to have slipped out I’ll run with it. To a certain extent, we’ve become immune to Big Rock Statements. Bold tales of Proper Heartbreak (still?), True Love (gimme a break, dude) and contrived jabs at ‘The Man’ (he’s paying for your studio you shits), just don’t cut it these days. And while McLusky parodied Big Rock by taking it to its logical extreme (My Pain and Sadness is More Sad and Painful Than Yours- ’nuff said) Kurt’s colloquial observations go the opposite way; what could easily have become a meek rehash of mopey indie songwriter-fare redeems itself by way of light social context and heavy rock‘n’roll swagger.

I won’t bother going into any depth about why this isn’t the best album I’ve ever heard - there are plenty of writers for sites like this who’ll happily tear their hair out over that sort of thing, if that’s what you wanna read. It’s fair to say Smoke Ring...’s reliance on gloom and loneliness rarely lets up. But he’s trying to find beauty in it, which I guess is the point. And y’know, I’d bet his best is still a-brewing, constantly stewing in that smokey Vile heart of his. He seems like that kinda guy.