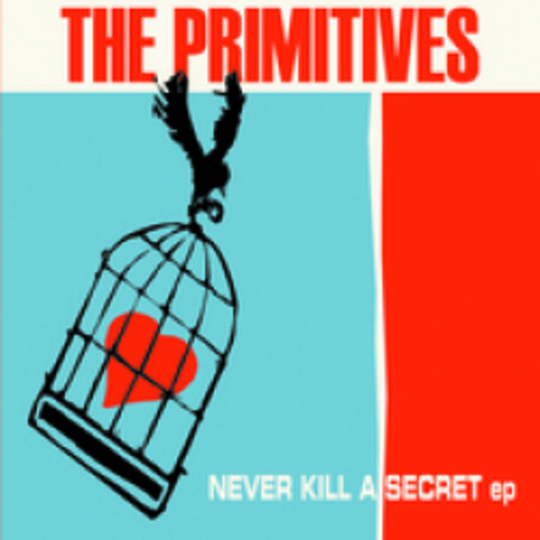 Without meaning to sound like a nepotist on a busman's holiday, it's difficult to disguise one simple fact, that being that I simply adore The Primitives and have done since 'Really Stupid' got me through A-Levels and sixth form many, many moons ago. Which is why last year's announcement that the three surviving members of their classic line-up had reformed with newcomer Raph Moore replacing the late Steve Dullaghan on bass had reformed for a series of shows and festival appearances was met with whoops of joyous excitement. That their performances at said shows were mostly flawless sets filled with the songs people wanted to hear rather than an endurance test in second-rate new material made the re-unions even more worthwhile.

Of course, what that ultimately means is that for the band to continue on the touring circuit, eventually they would succumb to unleashing something new on their tried and tested public, hence the release of the four tracks that comprise Never Kill A Secret. Despite this EP comprising the band's first recordings in nearly 20 years, nothing here sounds out of place alongside the bulk of the later half of The Primitives discography. And there, folks, lies part of the problem. You see, for all the raw energy, dynamism and general demeanour of their earlier works as Coventry's more pre-pubescent acerbic answer to the manic pop thrill of Blondie, the over-produced, watered down lustre of their more radio friendly latter wares pales into comparison when placed alongside one another. Don't believe me? Take a trip to Last FM or Spotify and play the far superior Lovely or Lazy 86-88 compilation then follow suit with Pure and Galore and the difference is panoramic. It's probably no coincidence that the bulk of the current live set consists of material plundered from the former, and a smartly sophisticated run through of the Lee Hazelwood and Suzi Jane Hokom's 'Need All The Help I Can Get' aside, sounds like an artefact from the band's less prolific era.

Nevertheless, opening track 'Rattle My Cage' finds Tracy (Tracy) Cattell in fine voice, pleading "Trouble, I know we're in trouble..." before delivering the line several thousand blokes of a similar age to me would have given anything to hear during those studious days of adolescence ("Are you the kind of trouble, that I've been looking for?"). The other original composition here, title track 'Never Kill A Secret' is less memorable, instead taking a more stripped down, semi-acoustic route that's quite breezy yet also bordering on the twee.

Closer 'Breakdown', another cover this time of Toni Basil's northern soul floorfiller, takes the blueprint from the original and coats it in a candy scented sheen of kitsch flavoured pop that brings the EP to a dizzy, if not quite spectacular, finale. Overall, Never Kill A Secret is a worthy addition to an already impressive back catalogue. However, when said back catalogue can boast singles like 'Really Stupid', 'Stop Killing Me', 'Crash' and 'Out Of Reach', it has to be conceded that there's nothing here on Never Kill A Secret that rivals let alone betters anything from their halcyon period.