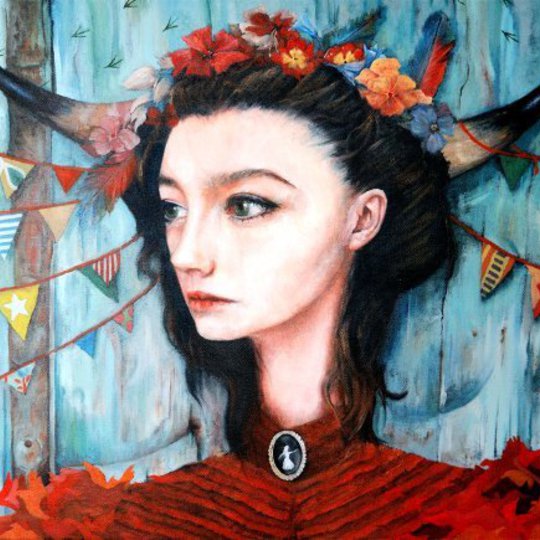 The Moon and You is full of anachronistic flourishes. Paradoxically, it is these very stylistic affectations that cement its position as an inescapably modern record. The last ten years or so has seen the blossoming of a baroque annex of popular music: there was a time, remember, when every other record wasn’t laden down with a string section, an accordion, some trumpets and a belief that slipping into a Balkan coda or a mid-song waltz was a rational course of action.

But now it's hard not to get the feeling that the river has been stripped of all of its gems - those only just beginning to pan the stream are latecomers to the gold rush. Shona Foster’s debut certainly has that air about it, the uncertainty of a late-night gatecrasher soberly treading through the debris of the party.

Musically, the record oscillates between skeletal, staccato rhythms and syrupy strings (often reminiscent of Van Dyke Park’s divisive arrangements for Joanna Newsome’s Ys). Neither of these extremes are executed at all believably; despite the obvious dexterity of the playing, the whole thing just strikes you as a little forced.

Opening track ‘No. 34’ chunters along reasonably enough, redolent of Raindogs-era Tom Waits but without the requisite charisma or narrative flair. It is a case in point; as a genre piece it is fine, but beyond that it doesn’t quite have enough ballast to hold interest. ‘Queens’ follows suit - a dramatic, foreboding track, swept along by sinister Disney strings. However, just when you are ready to doff your cap, the track deteriorates into a ludicrously histrionic crescendo and the cap stays on. The Leone-lite interlude of ‘Dusk’ is further evidence of musical versatility descending into sketch-show territory; rapid effect with scant regard for development.

That similar concerns can be voiced about the lyrics raises an interesting point. The knowing use of archaic language, alongside a raft of folk-tale staples, has become depressingly common fare. The first scrape of the violin bow and you can rest assured that the Jungian archetypes, quasi-biblical imagery and revolving cast of apocalyptic mythologies will follow in due course. In the wrong hands the tropes can be unwieldy, no less cliché than some god-awful metal band screeching about warlocks and dwarfs. The best one can hope for in this kind of situation is that the mock-gothic portentousness reaches the level of unwitting satire. Foster’s work falls between these stalls; neither elegant nor absurd - simply underdeveloped and lacking in emotional power.

This sense of underdevelopment is the most frustrating thing about this record. Underneath its numerous faults you can discern the potential for something much greater. Foster’s voice is enchanting, constantly maneuvering around a melodic line, endlessly searching for the sweet spot. On ‘Dancing Leaves’ the vocal smolders with intent, the top-line is strong but she is confident enough to coquettishly flirt with it throughout the track. It is extremely impressive and hints at the lusty chanson album that might lie beneath all of the pointless couching.

‘Oh Patience’ serves to strengthen this feeling; it is a still point in the chaos of the record; elegant, controlled and moving. There is subtlety enough in this track alone to exacerbate the feeling that so many others here represent missed opportunities for something greater. Compared to so much of the The Moon and You the track feels unbound and considerably more sure of itself- as a result it succeeds in being genuinely affecting.

Shona Foster’s debut album is an exasperating listen; the sound of a genuine talent laboring to find an authentic, believable voice. There are enough positive indicators on this record to make you think that she is capable of producing something stunning, unfortunately, this is not it. The Moon and You serves as an interesting introduction to an artist of potential and as a telling insight into the dubious longevity of the trend that spawned it.