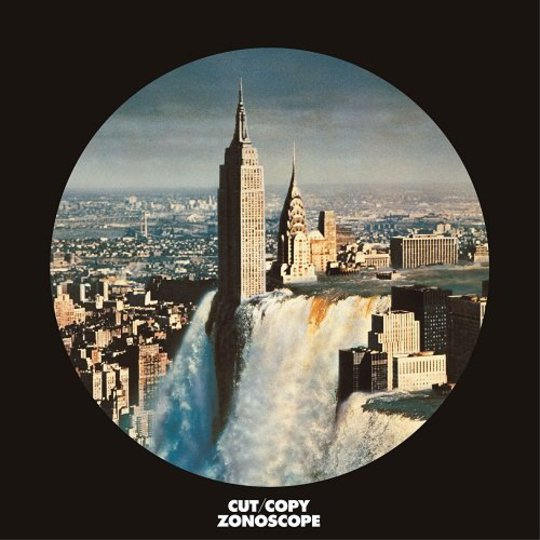 As part of the pre-release build up to Zonoscope, Cut Copy released some behind-the-scenes videos depicting the making of their third record. Far from revealing, they simply portrayed a band congressing in a suburban house, in something of a soporific state, slowly padding out tracks and giving very little away. They looked far too comfortable for the group that made their erratic breakthrough with 2008's In Ghost Colours; an album defined by its shamelessness and sense of fun. In fact, it was like nothing you'd imagine the recording experience to be like. Zonoscope however, defiantly retains the childish frame of mind of its predecessor whilst progressively moving into more mature territory.

That seems just about the right move to make: since 2008, Australia has produced a whole host of bands clinging to the infectious summer sound that made In Ghost Colours so very charming: Empire of the Sun, Gypsy and the Cat and a crop of chillwave acts poised with their first bedroom tape in hand. Naturally we knew there was more to this country than Wolfmother and AC/DC, but Cut Copy were looking ever so slightly in danger of losing their title as their country's finest export. Not to be: Zonoscope might well be the band's boldest effort to date.

Another attribute of Cut Copy's that can't be quelled is ambition. 'Sun God', the 15-minute-long album closer, offers a stark example. Conventional wisdom might suggest that lumping a quarter of your album's length into one final song leads to an off-putting, unsatisfying experience for the listener. It also doesn't help the fact that Zonoscope is chock-a-block with densely-compiled electronics, making songs difficult to absorb upon the first two or three listens. Funnily enough however, 'Sun God' might be the most immediate track: the melodies are more distinct, the mantra of "You've got to live, you've got to die, so what's the purpose of you and I?" repeated for an entire minute by which time you're patient enough to enjoy the whole ten minutes of spiralling instrumental.

The fact that 'Sun God' works at all is a sure enough sign that Cut Copy are as assured as they've ever been. Frontman Dan Whitford is at his dazzling, glamorous best; at times channelling a Remain In Light-era David Byrne, with his usual soft silky tones achieving more bite and bluster. The verses of 'Corner In The Sky' show a Talking Heads-esque respect for rhythm and in 'Blink and You'll Miss A Revolution's opening line of "take me on a journey with the rhythm in my feet", you really be blamed for mistaking Whitford for Byrne. That's up until 'Blink...' enters its chorus, with uplifting kaleidoscopic synths and light, fluffy vocal hooks - here, you wouldn't mistake Cut Copy for any other band.

The band's most admirable characteristic, however, is a skill for transition between one song and another. On Zonoscope, we're starved of the 30-second fillers that accounted for much of In Ghost Colours' appeal. Instead, abstract instrumentals divide the tracks when least expected, giving the listener a coherent album, displaying a type of beauty sometimes invisible amongst the songs' engaging hustle and bustle. There is one exception however: 'This Is All We've Got' commences with one of these transitions, an underwater vibe blended in with propulsive synthetics. Continuing along the path, Whitford enters ahead of a streamlined, delicate chorus. The song's finest moment comes in its coda: Whitford sounding almost feminine, swept away and calling out; "hide your eyes from the sun" with complete grace.

Sure, there are those who might be after an In Ghost Colours part two who might be alienated by this album's evident ambition, but for most of us, this is going to be a serious upping of the game.