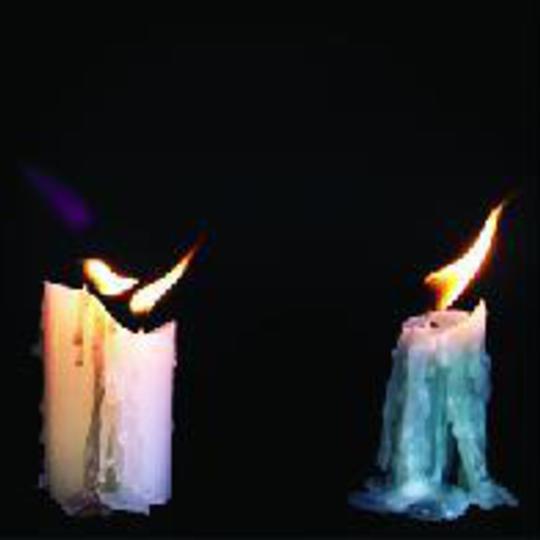 Baltimore trio Thank You have spent the past five years honing and dissecting their sound at regular intervals. Obtuse and unrelenting, their discordant racket serves as a soundtrack to their native city's bleak industrial climate, in the same way Big Black characterised mid-Eighties Illinois or Pere Ubu a decade earlier with Cleveland. Their cross-pollinated genre hybrid ranges from the angular verges of post-punk, through to leftfield abstract noise via occasional slabs of dissonant funk when least expected. In many ways they're something of a quandary, yet for all their awkward angst-ridden statements of intent, there's something of an engaging presence about them if Golden Worry is anything to go by.

Having released their debut World City back in 2007 and its more experimental follow-up Terrible Two a year later, it could be argued that Thank You have retreated to the drawing board a little with this record. Shortly after the release of album number two, logistical issues (original drummer Elke Wardlaw upped sticks for Berlin) meant remaining members Jeffrey McGrath and Michael Bouyoucas had to recruit a new tubthumper, and as anyone who's ever been in a similar position will testify, drummers don't come that easy. Especially ones with the ability to concoct such diverse polyrhythmic textures as those created by Thank You.

Nevertheless, replacement sticksman Emmanuel Nicolaidis proves to be a more than ample substitute, particularly on the elegiac 'Birth Reunion' where his timekeeping sets the tone for the song's keyboard driven flow. However don't be deceived by its swirling mantra as approximately three-and-half-minutes in, it changes pace, mood and direction, swapping its sedative introduction for a noisier finale by way of detuned guitars and Machiavelian chanting.

There's a diversity to Golden Worry's six pieces. '1-2-3 Bad' takes a similar post-punk route to that of No Age, offering minimal noise where others would probably take a more dance-orientated route. Not that they're averse to the odd shuffle either, as 'Pathetic Magic' exemplifies, its random, chaotic 4 x 4 beat sounding like an unholy mix of Shellac and the Gang Of Four. 'Continental Divide' takes freeform jazz out of its avant garde comfort zone and into a world where Mogwai reign supreme, while the sparse keyboard riffs on 'Strange All' could be how Mirrored would have sounded had they little more than disused warehouses and a run-down harbour to garner for inspiration. The frazzled narrative of album closer 'Can't/Can' takes Abe Vigoda's tropical punk shapes into Iggy Pop territory, its vocal and lyrical sentiments as unassuming as those which punctuate The Idiot for example.

As a body of work, Golden Worry is a fine representation of Thank You mk. II that allays any fears their fanbase may have had about the band seeking more commercial pastures with their new drummer. In fact, it's hard to envisage a more challenging, complex record than this, even with Yeah Yeah Yeahs/TV On The Radio producer Chris Coady manning the desk throughout.