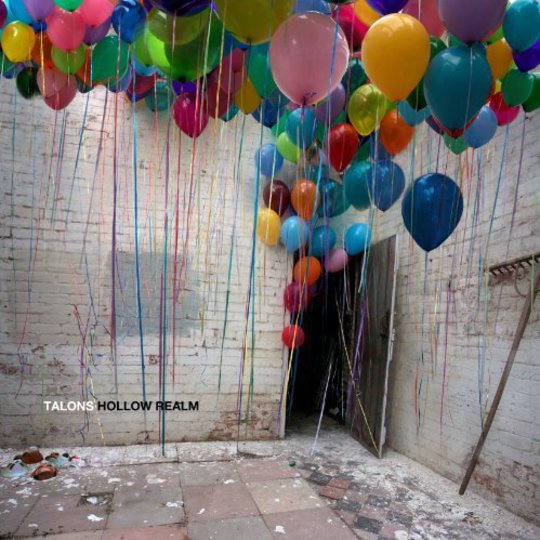 Talons. The name evokes the majesty of a bird of prey, as well as the ferocity of its eventual attack. It is a rare occurrence that a band’s moniker should be so befitting to their sonic template but this is most definitely the case with regards to Hollow Realm, the remarkably impressive debut album from the Hereford sextet.

It is with some unease that I propose the use of the word ‘epic’ but, in this instance, it seems to provide the best description of Talons’ intense instrumental stylings. The band’s secret weapon comes in the form of a dual violin assault that serves to add a sense of grandeur to proceedings, without the pretension that can often accompany such notions. Indeed, Talons have cornered the market somewhat with their unique approach to instrumental, mathematical post-rock.

‘St. Mary Will Be the Death of Us All’ provides a suitably apocalyptic introduction to Hollow Realm: its euphoric opening passage soon succumbs to a selection of doom-laden riffs as the cacophony of distorted guitars and tribal drums is majestically augmented by the aforementioned violin section. The overall sonic effect is a combination of all the best bits from Mono’s rousing scores, the driving force of And So I Watch You From Afar and the math-rock mayhem of Don Caballero. Although there are shades of their influences on display, Talons have created a palate of light and colour that is truly their own.

There is a firm grasp of dynamic contrast on display throughout Hollow Realm, with a songwriting and band dynamic well beyond its members’ modest years. The album’s tracklisting demonstrates this, with a well-judged balance of song durations and musical styles ensuring that every one of Hollow Realm’s eight tracks is both distinct and essential in its own right. From the bipolar aggression-calm of ‘In the Shadows of Our Stilted Homes’ to the leaping melodies of ‘Impala’, Talons wield a formidable power over the listener which comes to fruition in closing track ‘Hollow Depth’, the album’s tempestuous ten minute tour de force.

Although Talons’ most impressive moments lie in their lengthier compositions, Hollow Realm’s shorter tracks are effective in not only adding variety to proceedings but also highly impressive in and of themselves. The relentless energy of ‘Peter Pan’ proves particularly successful, with furious drumwork and merciless riffing demonstrating that, when they want to, Talons are more than capable of writing three minute songs. Indeed, the brooding atmosphere found in ‘An Expected Future Event’ and ‘Great Railroads’ provides a brief opportunity for the audience to catch its breath, only to be launched once again into the dramatic aural narratives that Hollow Realm creates.

Setting the bar high for future releases, Hollow Realm is a superb album, uplifting and moving with a sense of melody that is often lost with similarly technically adept musicians. If there are any criticisms they can only be levelled at the production as, during the album’s more extreme moments, the mix can sound a little muddy. Still, this is to be expected on a debut recording that falls on the alternative side of the musical fence. Meticulously planned and in general brilliantly executed, Hollow Realm is surely a late contender for one of the albums of the year.