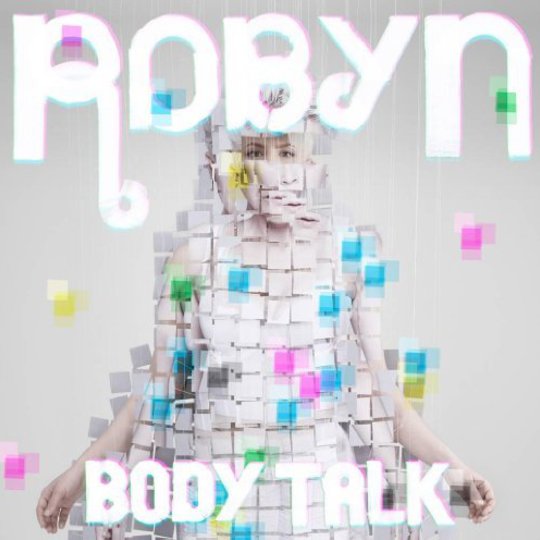 A few months back, Robyn wowed US audiences with a knockout show at New York’s Webster Hall, drawing to a close her sell-out North American All Hearts tour. Supported by milkshake-bothering diva Kelis, the UK’s own Dan Black and electro/hip-hop quartet Far East Movement, Robyn played to an ecstatic crowd of adoring fans. Yes, it seemed as though Sweden’s beloved elfin popstrel was finally getting the mainstream recognition that has proved so elusive over the last decade, as she fought to shed all trace of the late Nineties era R&B chancer in favour of the feisty electro maven we see today.

Body Talk is Robyn’s third major release of 2010 and (sort of) concludes the trilogy launched by Body Talk (Part 1) back in June. Pretty prolific then, or so it seems at first glance. Not so much when you consider that this is not the Body Talk (Part 3) that many of us were expecting: two thirds of Body Talk is comprised of the ‘best’ tracks from parts 1 and 2, with a mere five tracks of fresh material. Little exists in the way of an explanation here, and perhaps it’s down to nothing more than a lack of new material. Well, enough for a substantive third EP anyway.

In truth, these five tracks simply come across as stuff that wasn’t good enough to make the cut on parts 1 and 2. ‘Indestructible’ - the acoustic version of which appeared on Part 2 and the exception here - sits comfortably alongside ‘Hang With Me’ and ‘Dancing On My Own’ as an example of a pop-innovator at the top of her game. ‘Time Machine’, on the other hand, carries with it a distinctly unwelcome whiff of trashy euro-pop. ‘Call Your Girlfriend’ ‘Get Myself Together’ and ‘Stars 4 Ever’, all suffer from a common blandness that prevents them from, well, going anywhere.

So what of the rest? Highlights include ‘U Should Know Better’ - surely the best recent Snoop Dog collaboration this side of, well, Snoop and Katy Perry (tongue planted firmly in cheek). It’s a high-energy, electro-pop workout with a healthy dose of the trademark attitude that is so delightfully at odds with her more vulnerable moments. Snoop also sounds more alive than he has since his transformation from solo artist to collaborator-in-chief. ‘Dancehall Queen’ successfully channels the spirit of Cyndi Lauper, whilst ‘In My Eyes’ exhibits an endearingly earnest intensity featuring a vocal reminiscent of ‘Borderline’ era Madonna. When it’s great, then, it’s really great.

Taken as a whole however, Body Talk suffers from the same patchiness that pervades Robyn’s previous releases (the intermittent genius of 2008’s Robyn proving a great case-in-point here). Whilst this is arguably down to her much-publicised intention to release as much material as possible over a short space of time, one cannot help but wonder whether - with a keen eye on quality control - the Body Talk trilogy could/should have been a truly groundbreaking single album. In other words, it’s a classic double-album quandary of quantity over quality.

Thing is, Robyn, we know you’re capable of so much more.