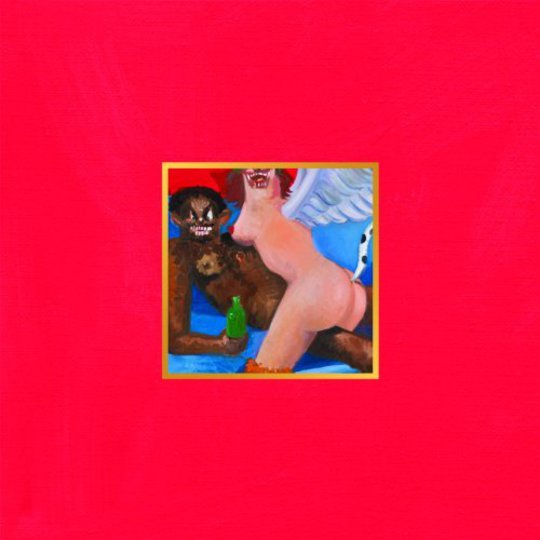 Times have been tough for Kanye West of late. Prior to beginning work on his latest album, the man suffered two awful life traumas (the unexpected death of his mother and the breakup of his engagement), events which wrought themselves in caps all over the angst-laden auto-croon of his last work. While 808s and Heartbreak may have helped West publically exorcise the pain of these tragedies from his life, the years between its release and his latest have been, if not as tragic, far from smooth. Since mid-2008 or so, West's life seems to have taken a turn away from the heart-rending and into the realm of the surreal. His proclivity for awards-show interruptions came to a gruesome head at the 2009 MTV awards, culminating in the President of the United States publically referring to him as a jackass and his being made the brunt of a particularly memorable episode of South Park (ouch). Add in a mullet and some over-the-top outfits, and these last couple years have been a confusing time for our protagonist. Fortunately for the listener, West has always excelled at turning personal adversity into excellent art (as 'Through the Wire' so perfectly illustrated). However, listening to My Beautiful Dark Twisted Fantasy, one gets the sense that, once again, Kanye has not escaped unscathed.

West has always been a person uncomfortable in his own skin, which to a large extent has formed the cornerstone of his likeability. Despite an unembellished background free of criminality or street hyperbole, West is, in my mind at least, a more engaging character than any number of Gambino clones due to the conflict in his personality. On the one hand he's a remarkably self-confident man, assured of his own brilliance and validated by a decade of remarkable success. On the other hand, for a chap who seems to be so enamoured with what he's able to do, he still comes across as a person with a whole lot of self-doubt. His music has always oscillated between grandiosity and self-recrimination—see 'All Falls Down' or 'Diamonds are Forever - Remix' for instance.

MBDTF, however, signals a shift in the way West appears to view himself. Previously, despite his occasional lack of confidence, he always seemed to cut himself some slack. However, the Kanye we have here, whilst still supremely assured of the greatness of his abilities, no longer appears to think of himself as a god guy. 'Power', the lead single, makes this absolutely clear. To pull a few quotes: "I'm an asshole"; "I embody every characteristic of the egotistic"; "I was the abomination of Obama's nation". Oh yeah, it also features a reprise that sees him fantasizing about jumping out of a window. Not exactly a breezy listen, then.

To some extent, the album seems to suffused with this same sense of regret: it works as a kind of meditation on the consequences of one's bad choices, a particularly appropriate topic after Kanye's last couple of years. Whether in the realm of the hypothetical ('All of the Lights', where Kanye raps from the perspective of an ex-con trying to regain custody of his daughter), the personal ('Power'), the macro-economic ('So Appalled', in which Kanye's verse seems to draw a parallel between the financial excesses of the past decade and his own "fucking ridiculous" behaviour) to the (doomed) romantic ('Devil in a Blue Dress', 'Runaway', 'Blame Game'), the album is concerned with the results of one's actions when one's actions don't quite work out how one hopes. Yet, despite standing in the wreckage of his reputation and wallowing in the consequences of his public misbehavior, West simultaneously manages to come across on this album as remarkably arrogant as ever, an unrepentant antihero, "the LeBron of rhyme", fully aware of what he's done yet still as bracingly cocky and compellingly contradictory as ever. Just a lot sadder than before.

To add to the thematic elements, on a purely musical level, MBDTF is West's most fully realized work to date. He's more sonically and lyrically spot-on than he's ever been. The production is trademark West, displaying a musicality which puts nearly any contemporary pop music to shame. And a breadth of obscure sample sources that could put the knowledge of many a music nerd to shame. Kanye's rapping his ass off here, and while occasionally eclipsed by a guest star (most notably a fire-breathing Nicki Minaj on 'Monster') his rhymes on the record are consistently up there with his best ever, frequently delivered through a layer of vocal distortion, displaying a barbed wit and a sense of dark humour, coupled in places with a sense of socio-political consciousness as strong as his work on The College Dropout, but with a world-weary, cynical tint. Most notably after the diversion of 808s and Heartbreak, the record is wholeheartedly a rap album (and features input from some old school greats, with guest production from RZA, Pete Rock, Q-Tip and DJ Premier). Yet MBDTF doesn't sound particularly like any of Kanye's previous work; nor does it really sound like any rap that's come out before, either. This album should serve as a challenge to any other artists who feel that rap as a genre is constrictive to stepping their game up (cough, Andre 3000, cough). For rap fans it's both a testament to the versatility of the genre and Kanye's own brilliance that he can make something so refreshingly different which still fits comfortably in the rap canon. Oh, and if all this wasn't enough, the album also includes a skit that's genuinely funny, a near statistical impossibility for rap albums.

So, then, Kanye West may be a jackass, a douchebag, an asshole, or all of the above; it's disputable. But what's indisputable is that he's one of rap's, and popular music in general's most consistently brilliant voices. He's had it rough (or as rough as can be for one with his level of talent and success anyway), but once again he's managed to take his adversity and turn it into perhaps the album of the year.

He told you so.