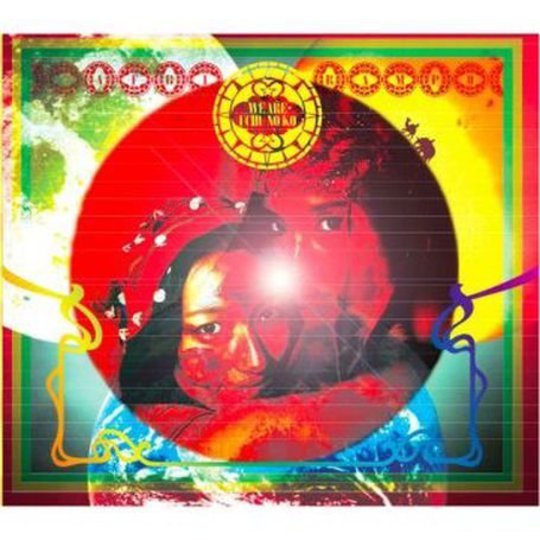 One of the textbook nightmares for yer independent label on a strict budget (which nowadays is pretty much all of them) is the scenario of a band turning in an album and then breaking up before it’s released. It ensures they won’t be able to sell any on tour, so in terms of publicity it falls to the person or people at the label to try and convince the world to hand over cash for some noise by a band who no longer exist. Obviously, this doesn’t make the music any less good in principle, but a lot of people would prefer to be sold a living organism if possible, y’know?

Rock Action, the Glaswegian label maintained by members of Mogwai, have admittedly had ample time to prepare for Afrirampo setting them this task: Oni and Pikachu, the two women who comprise the Osaka freak-garage outfit, announced their split and went through with it in June of this year. (By contrast, and coincidentally, I’m reviewing UK hardcore band Never Again’s discography LP on here next week; they broke up in mid-September after about 18 months together, to the presumed surprise of Holy Roar, who are releasing it.) Moreover, although a sizeable chunk of the duo’s reputation is founded on their frantic and sometimes nude live sets, since their first properly grabbable release around six years back, Afrirampo have gathered enough cult momentum that most people who would have cared about We Are Uchu No Ko in the first place should remain on board.

Ramping up the awkwardness for their label, this final release – their eighth ‘proper’ album, whatever that means – comes in at a few minutes over the maximum length of a CD. The second disc consists of one thirteen-minute track, ‘Sunwave Dance’, and ‘Hoshi No Uta’, a five-part, 20-minute closing salvo. Speaking extremely relatively, disc one showcases Afrirampo’s straighter rock side. A guitar-and-drums arrangement in essence, I’m not positive if the duo ever employ bass, but the opening ‘Miracle Lucky Girls’ steams in with some kind of rhythmic low frequencies, underlining a complex indie-punk blare that may be math, may be chaos. Not for the last time on the album, the band they most vividly recall for me is Brooklyn’s The USA Is A Monster, whose spectacular psychedelic blowouts were chiefly released by Load until their split last year and who are true unsung heroes of the noisy decade just passed.

‘Sore Ga Afrirampo’, while flirting with a stop-start jangle-indie coquettishness, unravels for long enough to allow their crypto-tribalistic side (see their 2006 album Baka Ga Kita for a more thorough exploration of this) to take hold: an inpenetrable mantra is chanted throughout the second half of the track, pitched up and down, echoplexed and mangled with the FX-flecked background fodder. It’s over seven minutes long, but has a freeness and elasticity which ensures that its length seems natural, not forced; this also applies to ‘Umi’ (ten minutes 32 seconds) and ‘Egolo Island’ (precisely a minute longer), impressively. ‘Umi’ is pitched somewhere between the calming noodling of Sonic Youth circa A Thousand Leaves, recentish, dance-influenced Boredoms and some possibly idealized Balearic vintage guitar ambience, although they work a goodly portion of steep-gradient skree into that pinpoint. ‘Egolo Island’ trots out the repeated-vocal-mantra trick again, rising to a peak of intensity four-and-a-half minutes in before breaking the whole down, embarking on some kind of torch-lit night-psych wander until the peak is again imminent, and finishing with some garagey crunch.

Initial suspicions that ‘Sunwave Dance’, disc two’s opener, might remain in a lollingly ambient, maybe even meditative state, are nixed when Oni and Pikachu start whooping hysterically over the rolling, low-key jamming. If not for the high-pitched Japanese voices front and centre, it would sound like Hawkwind or someone. The multi-segment remainder of this disc stays in broadly reflective areas, although ‘Hoshi No Vita Part 3’ is where the five-parter’s real plutonium core is found, being a window for Oni to chain-whip all-comers with some blistering Aufgehoben-meets-Landed axe abuse.

Compared to the deranged excess of some of the psychedelia that’s splurged out of the Japanese rock underground – the previously mentioned Boredoms; also Keiji Haino’s various projects, Oshiri Penpenz and reams of bizarro tackle on the PSF and Alchemy labels – Afrirampo are not especially ear-frazzling. Rather, they employ a certain pop nous and friendliness in their eccentricity. This has frequently been reduced to ‘twee’ or ‘wacky’ during their time on this earth, perhaps inevitably for a Western rock psyche which seems to have taken most of its notions of Japanese women from Manga comics and articles about schoolgirl prostitutes. (Read “For fans of: Shonen Knife” at the end of a review of this the other day, which makes you think that government plans to confiscate computers should in fact be stepped up.) However, one hopes it is not blithely orientalist to suggest that Japanese bands’ take on far-left guitar music has frequently come with an heroic lack of convention, with Afrirampo one of the many fine examples of such. Nor to hope that part of the band’s statement on their split – 'If our mother of monster say "PLAY!PLAY!together!!', then we will play!” – is supposed to imply we might not have heard the last of Afrirampo.