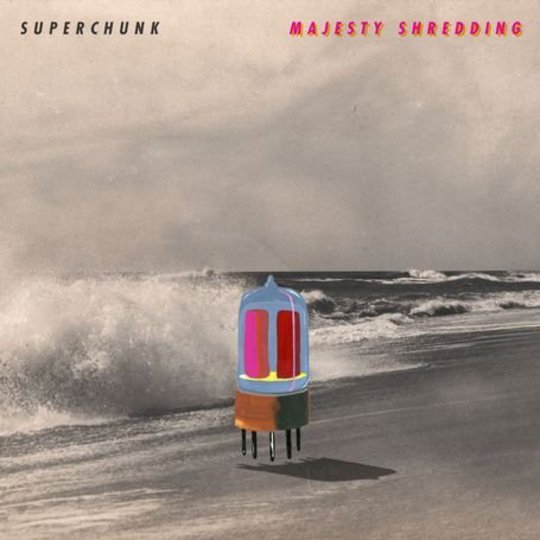 Rarer than a subtle Matt Bellamy solo is the band who can stand astride the twin pillars of intelligence and sheer fun within their musical scope. Realistically, the two seem diametrically opposed. To be ‘smart’ is to play clever tricks with tempo, time and densely intellectual lyrics that cause some to weep and some to snarl. And to be simply ‘fun’ suggests a rejection of the true ethics of music in favour of nothing more than beer, loose women and a thorough exploration of the power chord. They should, in all honesty, be opposite bedfellows.

If that is the case, someone should be having a quiet word with Superchunk. Because Majesty Shredding, the first album in nine years from the North Carolina luminaries (they’ve been doing other things, y’know? Like managing Merge Records and waving us all frantically in the direction of Arcade Fire) is an achievement of marrying the academic and anthemic together into 42 marvellous minutes. On one hand, it could cause impromptu moshpits at funeral parlours by means of its boundless, delinquent energy. And on the other, the cleverly structured and melded framework yields more depth with every repeated listen, rewarding you by way of an album that almost serves as a blueprint for how to create a modern rock record.

It emerges into the light through an opening barrage of hyperactive, caffeine-laden cannon blasts. ‘Digging for Something’ rejoices in its own mischief and zeal, blasting out with far more abandon and sheer enthusiasm than should be possible from a band in their forties. Second track ‘My Gap Feels Weird’ is even better, building from a fall-to-rise juggernaut riff into a chorus of pure delirium, seamlessly switching into deliciously spiralling angst-chords, the likes of which emo could one day achieve if it stopped preening in the mirror and scowling quite so often. ‘Rosemarie’ is piled high with fist-punching glory and ‘Crossed Wires’ is simply unashamed, abandoned mayhem with a beaming, drunken smile creasing its face. It is the equivalent of that mercurial partygoer who is friends with everyone, generously sharing his beer and hooking up with the best looking woman there. Just significantly less irritating.

The middle of the album however, is draped with gorgeously skewed frazzle-pop torch songs that fully reveal the wistful, memorable melodies at the heart of this record. ‘Fractures in Plaster’ is beautiful: a cracked Conor-Oberst-fronts-Modest-Mouse anthem that resolves into a triumphantly lovelorn fuzz-guitar solo. And ‘Learned to Surf’ is arguably the album's high-water mark. Reminiscent of Green Day if they owned a library card, it skirts around a Pixies-esque riff before rushing headlong into a bellowing, galloping crescendo of sing-along wonderment.

The intelligence is ever-present in both the door-slightly-ajar, stream of consciousness lyrics (always intriguing yet never quite revealing their true mystery) and the hidden depths between the layers of music. Within the desire to create bounce-along tracks that would grace any indie-disco is a trained, mature understanding about how to keep a song taut and enticing. You are forever being kept on your toes; anytime you try to relax, you find yourself grabbed by some about-turn in structure or spot-welded by some disconcertingly thrilling piece of lead guitar. It is easy to simply appreciate the captivating nature of the songs; yet the true reward is found in understanding the method behind the madness, the preparation behind the party.

As final track ‘Everything at Once’ races towards the horizon in a cloud of surf-rock dust, falsetto and echoing lead, it leaves behind it a record of intense joy, an intelligent, cohesive and profoundly engaging study of guitar music. If there is any failing at all, it is that there aren’t one or two outstanding songs to truly define it as a classic. But it is hard to be too critical when presented with 11 tracks of such high class and calibre. Whereas other pop-punk bands revel in sheer stupidity, Superchunk conjure up a profound musical purpose and sense of wonderment from behind every goofy-eyed chorus and oversized hook line. It is bloody impressive to say the least.