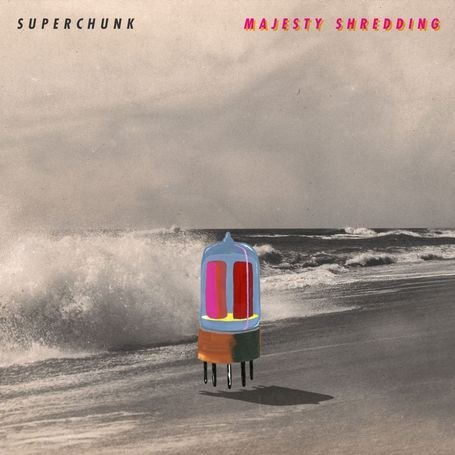 It is easy to simply appreciate the captivating nature of the songs; yet the true reward is found in understanding the method behind the madness, the preparation behind the party. »

awesome title, awesome, band - superchunk return with their first new album in almost ten years and those ten years have allowed them to create without a doubt the best record of their career and the downright best indie-rock album you are going to hear in 2010. self described as sounding like 'classic superchunk', though neither a return or a departure - 'majesty shredding' telescopes two decades into 41 indelible, action-packed minutes. it is the sound of youthful exuberance fine-tuned with grown-up confidence. the songs burst out of the speakers with giddy glee; superchunk as always strike a unique and effortless balance between melody and force, craft and spontaneity, the energy of youth and the wisdom of experience. on songs like 'my gap feels weird', 'rosemarie', and 'digging for something', singer mac mccaughan asks: how can we connect with our pasts and still move forward? on 'everything at once', the albums closer, he offers an answer "the feedback and the drums / the feeling noise becomes / nothing and everything at once." in a year when indie-rock has had a major resurgence with the likes of surfer blood, et al, and les savy fav have regularly been covering the band's classic 'precision auto' at the end of their sets, it makes sense that superchunk have returned to claim their rightful position at the forefront of thoughtful, intelligent independent rock music.
description from www.roughtrade.com