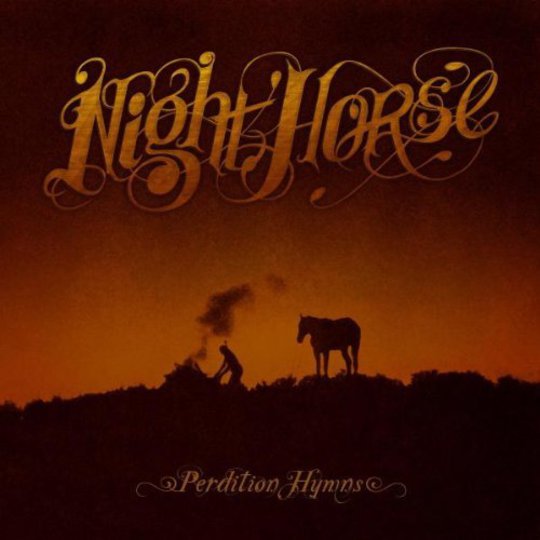 For a new band in a musical climate inundated with reunions and persistent old-timers, getting 'classic' rock right is no easy task. Where so many others have failed, Night Horse is intent on reviving this somewhat over-exploited field with their second release, Perdition Hymns.

It is unusual for a meat'n'potatoes rock band to have such a pretentious album moniker. Indeed, I had to give 'perdition' a quick Google before writing this review and discovered that the title is, essentially, Hell Hymns. Now that’s more like it. This is 50 minutes of pure blues-rock cowboy swagger, straight from the depths of hell, but not in a Nickelback kind of way. Although Night Horse cite Nineties grunge as an influence, as well as the obvious Seventies stalwarts, its musical manifestation is slight - think Stone Temple Pilots rather than Alice In Chains.

Opening with the driving riffery of ‘Confess To Me’, vocalist Sam James Velde asserts his presence with a powerful growl somewhere between Paul Rodgers and Scott Weiland, albeit lacking the range of the former and the distinctive tone of the latter. Throughout much of the record, Night Horse seem to struggle to create an identity of their own and while direct comparisons to the greats may be flattering, they don’t say much for the originality of the band’s output.

That said, Perdition Hymns does have some stand-out moments, if only because of the inconsistency among the album’s 11 tracks. Curiously, these highlights come in the form of ballads ‘Black Cloud’ and ‘Same Old Blues’; both evoke a Band Of Horses-esque melancholy, benefiting from the more varied instrumentation the quieter melodies bring. These tracks also showcase the best of guitarists Justin Maranga and Greg Buensuceso, whose solos add to the anguish-fuelled blues, rather than appearing simply as a necessity in an all-out rawk-fest.

Consistent with other aspects of the album, the lyrical content of Perdition Hymns is far from fresh. Velde spouts a whole host of blues clichés, whether it’s “angel eyes, devil in disguise”, “this train is rollin’ on down the track” or the classic “down on the killing floor”. With such hackneyed lines still seeing use in this day and age, it’s difficult to feel any emotional integrity from the vocal performance, especially when coupled with such lacklustre melodies.

For all that, Night Horse have the makings of a decent rock n’ roll group: a suitably ballsy frontman, a pair of competent guitarists and a remarkably solid rhythm section. The overall execution just feels lazy. No amount of slick production can hide the fact that there is simply not enough variety here to warrant listening to Perdition Hymns in its entirety; songs suffer from a lack of attention to detail, in particular the identikit guitar tones that dominate every track. Still, people listen to AC/DC, don’t they? Perdition Hymns may not want to be judged by modern standards but, ultimately, such a verdict is inescapable. In order to survive, Night Horse must not only embrace the modern day but find a way to integrate it into their polished but ultimately unsatisfying sound.