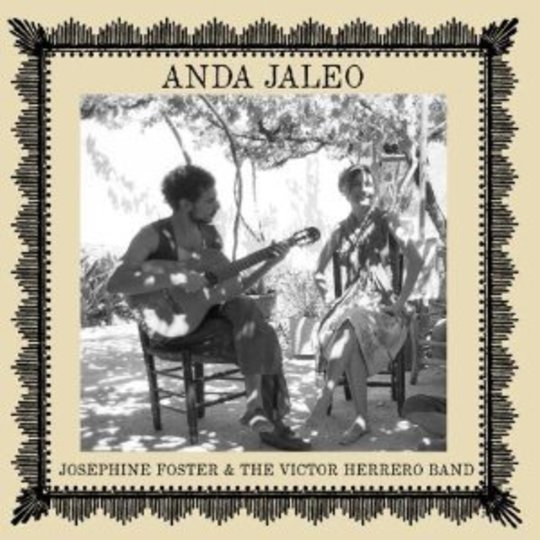 Over a ten-year career which has seen her dabble in fields as disparate as early American blues, psychedelic rock and even Lieder (that’s 19th century German song, on 2006’s A Wolf in Sheep’s Clothing), Josephine Foster and her husband Victor Herrero now offer up another left-turn with an album rooted in traditional Spanish folk music. Anda Jaleo (which loosely translates “Come on, commotion”) is based on the work of legendary Spanish poet, writer and dramatist Federico García Lorca, widely thought to have met his demise at the hands of Franco-affiliated Nationalists at the dawn of the Spanish Civil War.

A close friend and contemporary of Salvador Dalí among others, the Granada-born García Lorca espoused the kind of ideas and thinking that all but guaranteed his fate; likewise, the prohibition of his work under Franco’s regime. Among the wealth of plays and poetry anthologies he left behind is 1931’s Canciones Populares Españolas, a collaboration with Argentinean dancer and singer La Argentinita (or Encarnación López Julvez). The recordings comprise several anonymous Spanish standards among verses written by García Lorca and sometime paramour of La Argentinita’s, bullfighter and playwright Ignacio Sánchez Mejías, with artwork provided by Dalí himself.

The recordings exude a kind of bruised, unique elegance (listen here), which makes Foster and Herrero’s task – as historians, advocates and performers themselves – all the more daunting. Yet they have accomplished something wonderful here: Anda Jaleo is a genuinely moving homage to García Lorca and his generation, bristling with the same kind of energy and romance that he and La Argentinita brought to these songs nearly 80 years ago.

Recorded live and with what sounds like minimal fuss in the Grenadine Sierra of Southern Spain, it’s a gloriously evocative work. Standard ‘Los Cuatro Muleros’ (‘Four Mule-boys’) is a joyful opening track, where nylon strings and brisk percussion underpin Foster’s lush lead vocal with real vibrancy. It really is magical, and while all elements are present and exceptionally correct throughout the record, praise must be reserved for Foster’s astonishing vocal performance. Singing out of her native tongue – again – seems to have loosened her up, and her voice tumbles forth plangent, crystal pure here, beautifully complemented by those of the Herrero band on backup.

But this is a small scruple on such an otherwise warm and engaging set. The thing about Anda Jaleo is that, as with with some of the best art produced over the years, it actively makes you want to better yourself. Whether that’s via learning another language, dusting off an old guitar or boning up on history, culture, and all the brilliant, tragic figures who helped get us where we are today – or simply being sure to give yourself the time to listen to music for the sheer pleasure it holds – it’s something worth applauding.