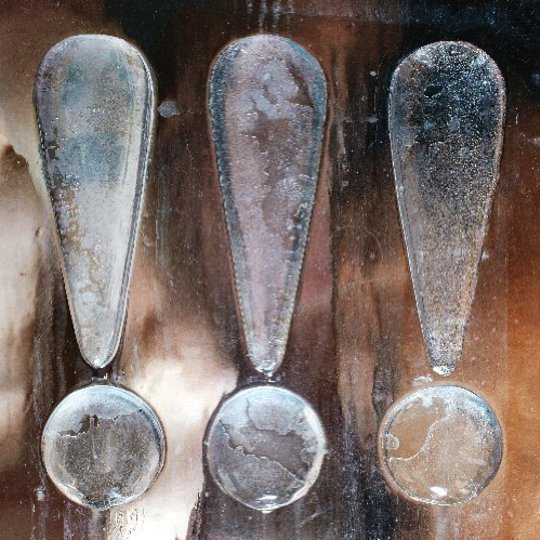 Good covers records: I can think of three. There’s Kicking Against The Pricks. There’s the new Tom Jones album. And there’s !!!’s 2005 EP. You know, the one made up of many-minutes takes on the Magnetic Fields’ ‘Take Ecstasy With Me’ and Nate Dogg’s ‘Get Up’. Very fun. And to my mind, also the sound of !!! breaking down what they do best.

On the one side, you’ve got our probably-drunk punk-funk collective drenching themselves in a wash of blissed-out mid-Nineties Stephin Merrit – doing frankly unsavoury things, in other words, to melodies of a complexity you’d think were beyond them. On the other, a multi-instrumental attempt to recreate Snoop’s cousin’s filthy three-note range that rapidly descends into a batshit-mental psych-thrash wig-out. Layering a Har Mar-style sexy joke on top of a remarkably successful attempt to make everything – guitar, vocal, the spaces in between, everything – sound, well, percussive.

It was a brief introduction to all the coolest things about !!! starring just two songs. Because it’s when they succeed in churning up all of the above that the band are at their juiciest. Think ‘Me and Guiliani Down At The School Yard (A True Story)’ exploding into, and then out of (just as quick) a from-nowhere epic chorus. Think Myth Takes’ ability to produce three same-but-different singles as banging as ‘Heart Of Hearts’, all Madchester groove, ‘Must Be The Moon’ with its sleazy breaks and the cock-out grind of ‘Yadnus’.

It quickly becomes clear that on Strange Weather, Isn’t It?, !!! are desperately seeking hooks and forgetting about too much of the other stuff. But hot damn do they find those hooks: Curtis Mayfield guitar licks and ‘Stayin’ Alive’ bass on ‘The Most Certain Sure’; Vampire Weekend ‘African’ guitars and funky housey vocals on ‘Steady As The Sidewalk Cracks’; a monotone, She Wants Revenge-style Eighties pastiche which throbs through ‘Jump Back’. Nic Offer’s increasingly Bernard Sumner-resembling drone is regularly out-trumped by Shannon Funchess’ much bigger, rounder pipes. The whole kaboodle has the same postmodern-disco feel as the first Hercules and Love Affair record.

Not that you’d know it to listen to the opener. Already much-circulated, ‘AM/FM’ is a bit of a red herring, replicating the revving bass, house party aesthetics, banging drops and silly murmurs (“AM/FM: it’s the only friends he got left… AM/FM: they always talk too much”) that have always defined !!! albums. And when this basic, beaty blueprint gets a more selective injection of pop, we’re in business. ‘Wannagain Wannagain’s schizo-melodies go all euphoric, then all guitar, then all horn, then all Nine Inch Nails, then back again – at least three times over. ‘Jamie, My Intentions Are Bass’ interweaves five completely different guitar sounds with some sweet crescendos and the album’s funnest chorus: “Jamie, my intentions are bass; I just want to kiss the look – I wanna kiss the look on your face.”

But these layered, multi-directional numbers stand out rather than fit in. On either side are tunes a little too straightforward, big ideas a little too self-contained to really mesh in the way you want them to. The overall effect is a disappointing sense of something like hollowness – culminating, appropriately enough, in a track called ‘Hollow’ which reminds me of nothing so much as Gwen Stefani’s ‘Hollaback Girl’. Weird.

Much has been made of the fact that parts of Strange Weather, Isn’t It? were recorded in Berlin – that it represents !!!’s ‘Berlin album’, indeed. This is probably most detectable in the To Rococo Rot-like palindromic polish of closer ‘The Hammer’, all dribbly bass and clattering percussion scaling up and up to a clifftop-drop of Josh Wink enormity. The fact that !!!’s fourth record draws to a close via such an unambiguous highlight is a testament to both their magnificent unpredictability as a band, and the album’s real problems.