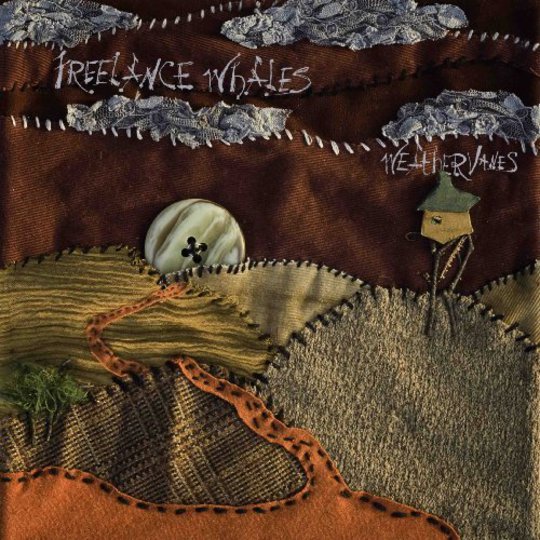 Freelance Whales are soooo noughties. When I listen to Weathervanes I can’t help but envisage some thick-rimmed glasses, sweater-vest and Converse wearing teen digging the latest Death Cab For Cutie or Hawthorne Heights tracks on MySpace (I hasten to add I am not envisaging my younger self). Freelance Whales could have been pretty popular in 2003 or 2004, but in 2010 there seems much less of a market for this breed of earnest, lightweight indie-pop.

For those still that way inclined, however, Weathervanes may very well be something of a treat. Frontman Judah Dadone possesses nasally melodious pipes, which undeniably bear a resemblance to those of Ben Gibbard, although in musical terms Freelance Whales seem more inspired by the laptop-pop sounds of Gibbard’s collaboration with DNTEL, The Postal Service, than Death Cab themselves. This is particularly evident in the clipped beats and droning low end synths of ‘Starring’, and a similar electro buzz that slinks its way through the energetic ‘Kilojoules’, although the latter equally comprises of standard Noughties indie rock instrumentation, including glockenspiel. Indeed, along with banjo, the glockenspiel is probably the most notable instrument on the record, although other non-rock (but not atypical for 21st century indie) instrumentation such as harmonium add further density to the sound. It’s perhaps the over-reliance on glockenspiel to pick out lead melodies that most recalls early Noughties indie-pop, though that's not to say it doesn’t add something. On album opener ‘Generator ^First Floor’, glock and banjo licks weave amongst each other in beautifully pointillistic fashion afloat a sea of harmonium; after a lengthy intro of swirling synths, and what sounds like a problem with the plumbing, it’s a shame they don’t get to do so for longer. Bafflingly, many have drawn comparisons between Freelance Whales and The Arcade Fire and Sufjan Stevens, although the only thing they really have in common is the use of certain instruments.

Freelance Whales achieve nothing like the creative peaks of those particular artists; at times they sound like their main ambition might be to soundtrack some US teen dramas - had they been around in 2004 it would have been no surprise to see them grace the stage of the Bait Shop in The OC. This isn’t a criticism as such, more an acknowledgment of their gentle melodicism and accessibility. ‘Kilojoules’ has simple acoustic verses embellished with an ascending melody shared by glock and synth and an infectious chorus of garbled electronics and staccato guitar buzzes, but has the unfortunate lyrical punchline ”I've arranged for your phobias to be performed by a string quartet”. Lyrics prove to be something of an achilles heel for the group. The aforementioned synth-heavy ‘Starring’ is catchy and dynamic, but features cloyingly adolescent lines like ”Shut me up with your long tube socks, they don't scream ‘Let’s just be friends’”. Single ‘Hannah’ would be serviceable sugar-rush indie-pop, but the giddy music only exacerbates the painfully clichéd lyrics wherein Dadone enquires ”If you’re partial to the night sky, If you’re vaguely attracted to rooftops”.

The strange thing is that there are moments where it all comes together and Dadone even has the odd prize turn of phrase, when he’s not playing up the fact that once upon a time he was a sensitive teenager. ‘Broken Horse’ has a nice line in campfire acoustics and ethereal keyboards, and the more organic territory is fertile ground for Dadone’s most intimate and sensual lyrics: ”I light up the gas in the den and stand there in the thin winter light, but oh god, that curve in your spine, a question mark, a doctor's sign, was framed by the windowsill”. ‘Location’ is their apex, an aching acoustic ballad with a throbbing synth pulse, gorgeous backing harmonies and lyrics that are genuinely affecting in the details rather than just earnest clichés: ”I’m floating up the stairwell with my toes grazing the cedar, thinking softly what tinderbox we live in and what a flammable heart I’ve been given.

With a few more moments of unpretentious personal reflection and musical nuance like ‘Location’, we’d be able to forgive Freelance Whales their derivativeness and lyrical shortcomings. As it is Weathervanes remains a catchy album that will satiate those with an indie-pop sweet tooth, (the type who can bear glockenspiel on every track) and maybe even offer the odd moment of genuine inspiration. Many of us will find it all a little too familiar and unengaging to get that far.