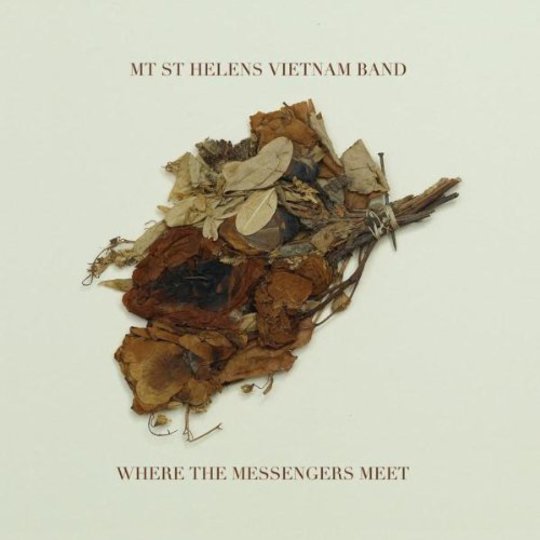 The general consensus about Seattle rockers Mt. St. Helens Vietnam Band's self-titled debut effort seemed to be that it displayed flashes of promise, but was too often mired by their constant desire to take songs in unpredictable directions and cram as many disparate genres into one song as they can. Occasionally these stylistic detours would ruin an otherwise acceptable song by killing its momentum dead or crowbarring in incongruous sounds; equally often it was the case that they were the song's sole grace. This ultimately backfired, as their penchant for 'unpredictability' in itself became a predictable occurrence on every track. The resultant record sounded oddly incomplete and the group's identity was defined more by their public service announcement style videos and conflicting reports concerning the family relations between the frontman and drummer (some say they are brothers, some say father and son) than the music itself.

Where The Messengers Meet suggests that MSHVB took these criticisms to heart, because this time round they've reined in the eccentricities and put the focus squarely on quality. Consequently they successfully sacrifice breadth for depth. Draping your rock instrumentation in baroque strings isn't exactly the most imaginative way to get yourself taken seriously, but 'At Night' justifies it by way of juxtaposing the swelling string section against passages of spare fried-blues guitar bursts. Indeed, MSHVB haven't given up on their old tricks completely, but here the contrast between the gritty guitars and orchestral swells is a complimentary one, where each part of the song serves the other as opposed to jarring with it.
Production-wise the record less cluttered allowing frontman Benjamin Verdoes to exert greater force of personality in the fiery verses, although even the busier songs sound more carefully arranged.

The Grizzly Bear comparisons hold weight in the light of the gorgeous 'Gone Again', which perhaps displays MSHVB's newfound nuance in songwriting dynamics better than any other songs; eerie organ vapours linger amidst skeletal guitar, dissipating at the entrance of the intimate vocal harmonies of "I look up you're gone again" with the organ sounds gradually taking on a more consuming aqueous form. The subsequent 'Bitter Cold' takes a rather more melodramatic approach with its pseudo-gothic folk, certainly less haunting than the preceding track, yet thematically it is more directly concerned with the ethereal, "When will you go, you walk like you're chasing a ghost".

Where the Messengers Meet undoubtedly pursues a more straight-faced and heartfelt course than their debut, but the smoothing over of some of their idiosyncrasies doesn't see MSHVB completely subdue their mischievous side, it's just expressed more coherently. 'Hurrah' sees them trade the (occasionally) goonish riffage of their debut for needling guitars redolent of Wolf Parade/Modest Mouse with Benjamin Verdoes barking his words accordingly before ending an archly violent barrage of guitar and keys. 'Cadence' sees Verdoes play his lovesick persona off against a laid-back nautical jauntiness, all busy organ twiddling and knotty guitar, that once again recalls Modest Mouse, but is no worse for it.

This brings us to the record's biggest drawback; it is only really on the album's most emotionally direct moments ('Gone Again', 'Bitter Cold', album closer 'George Clark') that it feels like MTHVB are putting a personal stamp on their music. It would be totally unfair to accuse them of cribbing all their ideas from those that came before them, but all the same, everything on the record sounds kind of familiar.

Perhaps now that they've rid themselves of their self-sabotaging musical instincts of their first album, they are only just beginning to discover their own voice on their second. It seems it will take a third record for it to be fully realised, meaning that 'promising' once again seems like the right word, but on Where The Messengers Meet the Mt. St. Helens Vietnam Band do a good deal of delivering too.