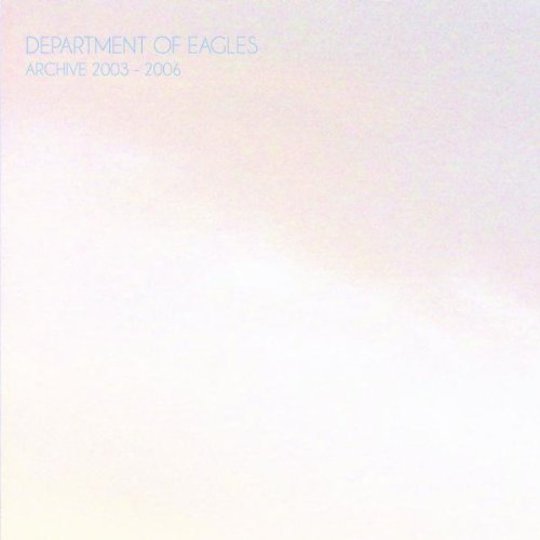 The release of In Ear Park on 4AD in 2008 took Department of Eagles on a rarefied journey toward fully-formed band status after commonly being regarded as an endearing side project partially conducted by Daniel Rossen from Grizzly Bear. Naturally, every artist involved in a side project hates it being called thus, but the scattering of recordings that preceded In Ear Park never really gave any inkling that this was anything other than a couple of former college dorm mates messing around in their bedrooms for fun. Perhaps the pairing actually missed that status, because they’ve returned to their origins, ransacked various tapes, and put together this compilation of recordings from the early days of the band.

This record is essentially a series of sketches that serve as blueprints of ideas that have been worked into both Grizzly Bear and Department of Eagles songs. Sometimes it sounds like a practice run for the soaring ”ahhh-ohhhh” choirboy harmonies that Rossen helps bring to Grizzly Bear, although here those vocal inflections are less fully formed and sound more like they’ve been lifted directly from his musical heroes after countless hours of study. It’s not difficult to picture Brian Wilson heading to his attorney’s office with a copy of Smile tucked under his arm when the lilting harmonies that open up ‘Practice Room Sketch 2’ really kick in.

But it would be churlish to complain too hard. This is, after all, a series of demos, perhaps released to show how the band got from A-Z and shed the obvious hallmarks of those influences in the process. ‘Practice Room Sketch 1’ is even a rehearsal of sorts for Grizzly Bear’s ‘Easier’, although how many people outside their hardcore fanbase will recognise that, or even want to hear it, is moot. The most fascinating aspect of Archive 2003-2006 is how ambitious Rossen and his Department of Eagles partner Fred Nicolaus were back then. Faced with recording on the lowest of lo-fi equipment, the pair still forged an impressively widescreen vision, working in string instruments and a most un-Grizzly like gnarled distortion sound on ‘While We’re Young’.

Occasionally the album meanders into pointless blind alleys and runs out of steam. One of the longest tracks here, ‘Brightest Minds’, simply sounds like a generic alt country track imbued with an insufferable jauntiness, making the record droop into an uninspired malaise at the midway point. ‘Grand Army Plaza’ is the kind of Grizzly-Bear-by-numbers song (think: raised falsetto, sorrowful yearning, ebbs and flows in the tempo) that Rossen can surely write in his sleep at this point, and while he might not have had that ability back then, hearing it now will simply inspire listeners to reach for their copies of Yellow House and In Ear Park.

The peaks of Archive 2003-2006 come when Rossen and Nicolaus stretch out into the unfamiliar, pushing themselves beyond the sounds they were slowly settling into as their stock in trade during this era. ‘Practice Room Sketch 3’ is a lovely piano ballad drenched in quietly hummed vocal melodies, again with touches of Smile and Pet Sounds holding sway, but pulling away from their obvious musical cues and instead resembling those records in the fearless sense of experimentation they came to represent. ‘Flip’ also deviates from their path most traveled, this time throwing in a jarring thwacked guitar line that sound like blood and flayed skin flew from the strings during recording, but anchored firmly in Department of Eagles territory via the beatific vocalisations and stop-star rhythmic thrust.

It’s unlikely that Rossen and Nicolaus are expecting this to have any appeal far beyond a fans-only treat. But hidden amongst the eclectic moments of inspiration and odd ideas that didn’t quite work out is ‘Golden Apple’, the penultimate track here, and the one moment when the band really hit on something special. It’s the simplest track on this album, built from ascending string motifs, plonks of piano, and a straightforward beat that offers welcome respite from Rossen’s obvious obsession with dislocated rhythms. It ends in a drunken wooziness that continues on the similarly sodden ‘Practice Room Sketch 5’, which feels like the world falling out from under your feet during an alcohol-fueled nosedive. Perhaps Rossen and Nicolaus should hit the bottle more often.