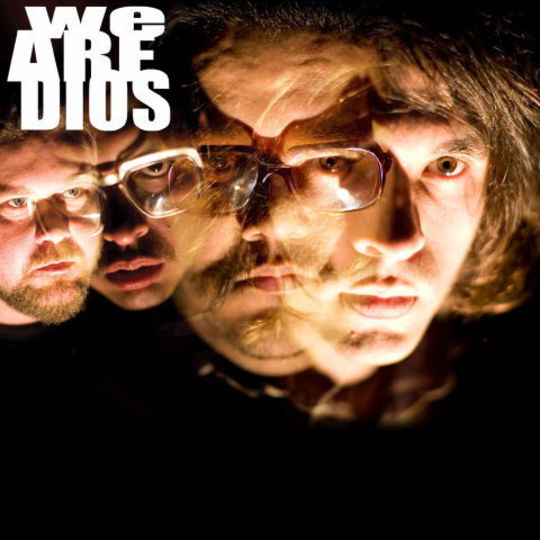 The first couple of things I knew about California's dios were that Travis Keller from Buddyhead is a big fan and also that the now-dead Ronnie Dio tried to push some kind of silly lawsuit at them over their name. Very shortly after this it was realised that they are in fact signed to Buddyhead Records (duh!) and had changed names to dios malos before returning to the previous title once more. These facts aren't particularly insightful, but the title of their third album, We Are Dios, is – being more a statement of intent and affirmation than anything else. 'We are here and this is what we do.'

One rightly hesitates to ever use the word 'weird' to describe any form of music for fear of the word's redundancy and impotency, but there are undeniably a lot of weird moments littering this record – vocal breaks, abrupt stops, warped and lowered melodies along with plenty else that you'd expect from psychedelic pop, including a sample of 'Imagining The 10th Dimension' which - if you manage to view the breakdown of it - really sets your braincase bursting. Regardless, the adjective in question now carries a modest weight and dios's leanings towards it are similar. It is clearly not a concerted effort to try and sound 'a bit different' though, as catchiness is always put firmly first in order of importance. Yet it's where the oddity is cranked up that the best is displayed. The cover of FYP's 'Toss My Cookies' is one of those moment, though it is more than just a moment. What they've done is turn a lyrically charming ("today I'll buy you an ice cream sandwich with my allowance / make you face outta tater tots because I really like you") but simple power-chorded punk song and fill in the gaps. And then a bit more still. It would be cute if it wasn't for the strangulated cat samples.

That occasionally distracting tract is followed by 'Stare At The Wheel' which, if you had to pick a pop song from their back-catalogue to save your life, would be high on the list, if not actually at the summit. The steadily-paced, reverb-touched, single-stringed guitar lines move in and out of the scene, often engulfed by a similarly-spaced melodic hook of textbook quality. Things then slide into to a psychy slow-jam, dying a lethargic, beautiful death – a motif much repeated throughout. If the breast-obsessed film director Russ Meyer were alive and still making films, great cinematic use could be made of this one.

It's no insult or mistake to say that this record – as with previous efforts – takes a few cues from a time gone by, some of them perhaps obvious (hello Brian Wilson!), others a smidgen more hidden. Like the time when the most ballad-like track – 'Tell Me Thing' – smacks of Rod Stewart's 'I Don't Want To Talk About It' and... well, all those other Rod Stewart songs which start in exactly the same way. (Correction: The Stewart song in question is actually 'You Wear It Well', so I think that point has been made.) Slow-moving restraint is shown with the penultimate and final slices and, predictably, there's a handle placed strongly on this variation, with the solemly-blissful 'It Will Feel Good' closing on a note and theme acting both as counterpoint to the album's more carefree openings.

If you inhabit a country which experiences a summer with more than a few days per year of actual proper heat and humidity, and like music with a dry heat and occasionally warped psychedelia whilst at all times maintaining a pop sensibility, then this could be the record for you, right now. If you don't, then you'll just have to settle for it doing all of those things in a slightly cooler environment. No great loss, in fact it's a great gain. We Are Dios is that statement of affirmation – 'build from the basics and then fuck about' applies to everything. Experimentation for its own sake has always existed, it's not like piling 17 synths and 'found' drum loops on top of each other into near indistinguishableness is the mark of a genius. It's what you do with it. Every one of the ten tracks is a reminder and example of this balance.