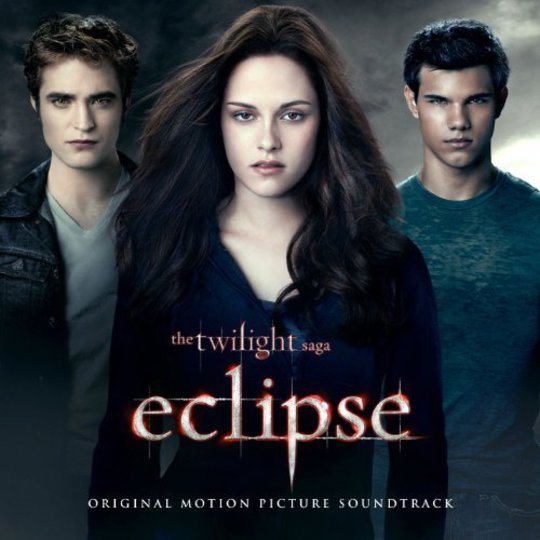 You are reading a review of the Twilight Eclipse soundtrack on Drowned in Sound. There is something not right about this, you would think. And you would, perhaps, be right. I am guessing you are not considering whether or not you need to purchase this soundtrack. You are vaguely aware of Robert Pattison, Kristen Stewart, and Taylor Lautner, but not enough to know whether I just spelled their names wrong. None of their faces are on your lunch box. The Twilight Eclipse soundtrack is not material to your world. (I would not , however, put True Blood past you).

So why should I write about this soundtrack, and why should you care about it? First of all, because it is HUGE. This album is going to make more money than yer basic indie band could even comprehend. The number of young girls who currently have this on their birthday lists is probably larger than the number of people who have heard of K records. In a time where few people buy albums and tastes increasingly fragment, this album represents the monoculture; one of the few ubiquitous forces holding the mainstream together.

Not only is the magnitude of this thing staggering, so is its potential impact. This is likely to be the first album a large proportion of purchasers will ever own. When we look back at the event which turns us on as music lovers, hearing the right soundtrack is a pivotal transformative force, right up there with having a cool older cousin or getting a crush on a goth. This album represents a musical gateway drug for hundreds of thousands of fans. Due to this alone (and to the fact that, if you interact outside of indie circles and are young enough you will have to listen to it at some point) it deserves consideration.

Before I actually listened to this album, my optimistic side took hold. Imagine the possibilities when soundtracking a film with power to brainwash this many tweens. Misfits, Cramps, Birthday Party ('Release the Bats'), some Fleetwood Mac for the tender bits, John Carpenter scoring the fight scenes. Essentially the Repo Man soundtrack, but for 12 year old girls.

However, things are never this awesome, and you review the record you get, not the one you want. What we have here does not break any ground. To compile this soundtrack, the grim illuminati behind Twilight reached out to Alexandra Patsavas, 'musical director' and the woman who is likely responsible for more indie bands getting publishing cheques this decade than anybody else. Having chosen the music for The OC, Gossip Girl and Gray's Anatomy, Patsavas is the Muhammad Ali of choosing vaguely indie-ish bands to soundtrack pop cultural events. And in this case, she has compiled an album of all-new songs which gives the audience what it wants: the perfect soundtrack to INTENSE, HIGHLY EMOTIONAL, TEENAGE LOVE.

The song choices here hew close to Patsavas' previous efforts. This is not a person who likes loud noises. Acoustic guitars and mellow percussion abound, coupled with slick production, a general anthemic feel, and oh-so-yearny melodies. Tempos pick up occasionally, but as a whole this album is exactly what I would have chosen for a cuddle with my sweetheart if I still happened to be 14 and capable of non-ironic emotion (this vestigial me would have skipped directly to Florence + the Machine's contribution, 'Heavy in Your Arms', while holding his girlfriend so tight, as he stifled a sob and wondered why the whole world seemed like it was conspiring to keep us apart. He would have let it play through for Sia's contribution, 'My Love', as well).

A lot of recognizable names appear, some firmly entrenched on the MOR side of alterno-indie (Bravery, Metric), some confusingly Nineties (Muse and UNKLE). Beck and Bat for Lashes collaborate with an arty, spacey take on teenage makeout music. The Dead Weather provide a sinister, 'Gold Dust Woman'-inspired take on teenage makeout music. Cee-Lo makes a confusing appearance replete with strummy guitars and whistles, singing like Peter, Bjorn and/or John was holding a gun to his head in the studio. Vampire Weekend, a band who can usually be relied upon to do populist in an engaging, original manner, flop here, exchanging their global pop template for a superficially anthemic U2-lite, an alarming new direction for the band.

Things are not all bad, however. Fanfarlo's contribution is delicate and bouyant, a measured, bluegrass inflected indie folk not miles away from Fleet Foxes. It's the most disarmingly emotional piece of music on the album for me, probably because it's the least overwrought. The Black Keys' contribution sounds like it'd be more at home on True Blood than Twilight, which is to say bluesy, somewhat trashy, and by far the most libidinous moment on the album. And even the Muse track is fairly engaging in a Wild Beasts-ey, show tunes sort of way.

All and all, this album is not great. As an introduction to indie music for a generation of youth, it's a missed opportunity. However, it could be a lot damn worse. We should respect the Twilight Eclipse soundtrack, and Patsavas's body of work in general, for what it's not. In a world where the monoculture gives us Susan Boyles and Justin Beibers, Alexandra Patsavas has just introduced a lot of 12 year olds to Bat for Lashes. A lot of things are terrible, but this is just mediocre, and right now this feels like a small victory.