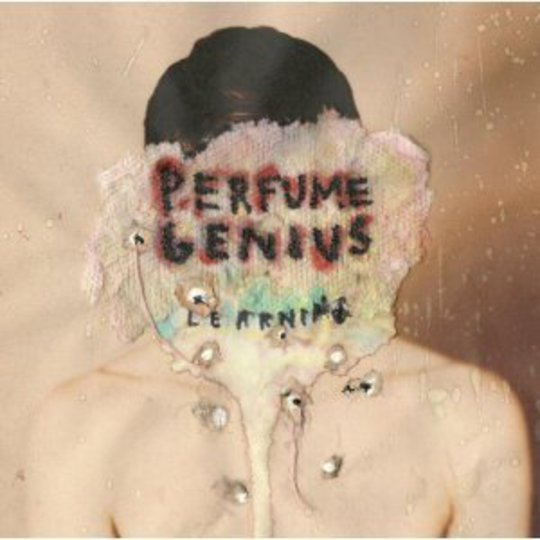 When I was at university my friend and I would play each other music constantly, usually accompanied by a Super Nintendo, a worn copy of Mario Kart and countless rolled up cigarettes. We had this running joke where every so often one of us would put on Grandaddy’s ‘Underneath the Weeping Willow’, leading us to engage in various stages of mock grief, staunching the imaginary tears that coursed down our cheeks. Of course, this wasn’t the only song that brought about such a reaction, and it wasn’t really a joke as such; more us amusing ourselves while tacitly recognising its parent album The Sophtware Slump as one of the saddest and most beautiful of the previous decade.

It was the same friend who introduced me to the music of Mike Hadreas (Perfume Genius, that is), and were we living together still I can only imagine how many shared spins Learning would receive. It is, not to put too fine a point on it, a desperately sad record, Hadreas’s voice quavering mournfully over a threadbare backdrop of piano, organs and synthesisers throughout. But it is also an oddly comforting, almost magical one – a singular work that dabbles in fairly dark waters, yet emerges cleansed; purged of the grief and confusion it was clearly born out of.

It is remarkable for a number of reasons, not least that the running order is chronological, everything within written subsequent to its decisive title track. The Seattle-born Hadreas spent a dysfunctional adolescence in New York, marred by addiction, abuse and suicide (all of which are considered over the course of Learning). Upon breaking point he returned to his mother’s house in Washington, and experienced some kind of epiphany as he pieced together said title track. Of the experience, he states: ‘I felt like my heart actually broke but in this sort of hopeful, genuine way. Like I could finally rebuild it.’

Part of what makes Learning so special is how exceptionally intuitive it all feels; after that first song was written the others tumbled forth thick and fast. Though they vary little in tone, they hang together wonderfully, gradually painting a picture of the demons that tipped Hadreas into near free-fall. Beguiling, affecting tunes they are too, of a deeply, often uncomfortably personal nature. There are obvious comparisons to be made with other singer-songwriters here: his soft, pleading register, simple chord progressions and primitive recording techniques most clearly evoke Daniel Johnston (similarly, the notion that his art is, if not the sole thing, certainly a major tie between him and reality). In its piercing honesty, Elliott Smith’s Roman Candle or Eels’ Electro-Shock Blues make for obvious antecedents, while its sparsity has something of Sufjan Stevens’ Seven Swans about it. I’m not the first to draw these kinds of reference points I doubt, yet music such as this ultimately transcends such comparisons, and its frequently heart-wrenching lyrics will affect and enthrall listeners in different and similar ways.

‘Mr. Peterson’ was released as a single, and has garnered attention for its ambiguous portrayal of a relationship with a troubled older man (“He let me smoke weed in his truck / If I could convince him I loved him enough / Enough, enough, enough”), while Hadreas delivers lines like “Look out, look out / There are murders…about” with such empathy that despite inhabiting a song preoccupied with death and isolation, they resonate with sweetness and clarity. Learning takes a turn for the truly unsettling when the focus shifts from Hadreas’s ivories to funereal swathes of organ and swirling, unintelligible vocal interplay. ‘Gay Angels’ and ‘No Problem’ best exemplify this approach – the former an elegiac, moving highlight, the latter set against weary programmed beats, both recalling composer Angelo Badalamenti’s soft-focus work on Twin Peaks.

Hadreas cuts a slight, androgynous figure in the few press photos circulating for Perfume Genius, sporting a black eye in one shot and darkened neck in another. Learning is a likewise bruised and suggestive affair; of catharsis and rare, redemptive beauty, which ranks as one of the most uniquely endearing and quietly forceful debut albums of recent years.