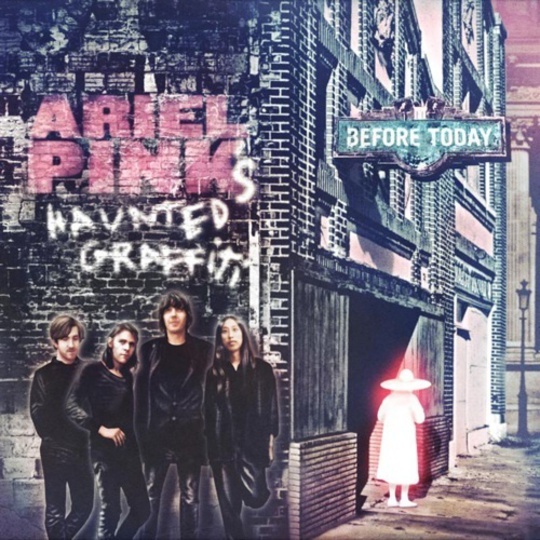 There’s a passage in Bill Drummond’s The 17 where he recalls traveling to Los Angeles in the mid 1980s, ostensibly to oversee the work of a hair metal band in his capacity as an A&R man for WEA. While trying to find the group in a labyrinthian studio complex, Drummond stumbled across a bloated Stevie Nicks, who was dancing eyes-closed to one of her own songs, lost to herself and the world. There are many styles covered on this, the first album by Ariel Pink’s Haunted Graffiti since signing to 4AD, but that glassy Fleetwood Mac production, which flourished on Rumours, gloriously saturated their sound on Tusk, and continued to be an obsession for Lindsey Buckingham on later hits such as ‘Big Love’, is glazed all over Before Today.

Drummond’s tale of Nicks bleaching out the world with her music in an anonymous Los Angeles studio isn’t just appropriate because of the obvious similarities in feel that Pink strives for on this album. Firstly, there’s the drugs. Nicks famously battled with cocaine in the mid Eighties, and while Pink has explicitly stated his fondness for softer drugs in the past (primarily weed, on ‘Gettin’ High in the Morning’) it’s not hard to imagine this album being made in a blizzard of white powder. That’s not to say it necessarily was constructed that way, but Pink is certainly mainlining Fleetwood Mac’s slanted coke-addled take on their soft rock sound from Tusk, which involved ripening songs with a fresh FM radio sheen and then testing their audience’s empathy via odd about-turns, unsettling moods, and a general feeling that Los Angeles had swallowed them whole and spat them out in the most unpleasant and self-destructive way imaginable.

Secondly, it’s easy to imagine the Ariel Pink of old as a solitary figure, chasing rhythms around his skull, capitulating to his own music, and making it sound as though the world outside his window didn’t exist, albeit in a more modest bedroom setting than Nicks’ studio indulgences. Much has already been made of Before Today being a step out of that environment, with its move into full studio recordings and higher production values. But while those tools are very much in place, most of this record is rooted in Pink’s origins as a low rent troubadour—several of these songs have appeared on prior Haunted Graffiti albums and singles, such as ‘Revolution's a Lie’ (which surfaced as ‘Evolution is a Lie’ on Grandes Exitos) and the So-Cal downer vibe of ‘Beverly Kills’ (from Scared Famous). Proof that you can take the boy out of the bedroom, but you can’t take the bedroom out of the boy.

In fact, Before Today isn’t a great leap on from previous Haunted Graffiti records. Aside from the cleaner production values, this is a familiar scattershot collection of outright pop tributary, which mirrors the saccharine thrills of ‘Helen’ and ‘Every Night I Die at Miyagis’ from House Arrest, and also blends in the kind of sun-warped instrumentation and love of groggy psych-rock that originally brought Pink plenty of attention. His fondness for twisted nihilism flourishes on the adjoining tracks ‘Butt-House Blondies’ and ‘Little Wig’, the first of which is Yerself is Steam era Mercury Rev aligned with female porn sighs, while the latter is the closest the album gets to a return to lo-fi, with Pink’s fuzzy voice comically straining at the song’s title over some prog-tastic guitar and keyboard interludes.

Pink is obviously keen to test his listeners by bouncing them through an array of colours and shapes (the Bongwater-esque ‘Menopause Man’, the twilight robo-rock of ‘Fright Night’), but the real benefit of the shift in production values is keenly felt on his overt ventures into pop. If a song like ‘Alisa’ (from House Arrest) sounded like it could be a palpable hit in the hands of an anonymous backroom production team and their starlet protégée, here we find Haunted Graffiti making their own stab at such glory. The cover of the Rockin’ Ramrods’ 1966 underground garage number ‘Bright Lit Blue Skies’ is the first hint at this direction, which triggers a buttery pop thread that weaves its way around ‘Beverly Kills’, which sounds like Beck if he’d crawled out of Stereopathetic Soulmanure and headed straight into Midnite Vultures, and settles elegantly in the lounge-y barroom piano tinkle of ‘Can’t Hear My Eyes’.

That particular strain of Before Today burns brightest in the beautifully nostalgic pang of ‘Round and Round’. It’s such a multifarious and densely layered track that it could be dissected over a ream of pages, but here are a few highlights: the ghostly hush of the first verse, which perfectly mimics the atmosphere of Godley and Crème’s ‘Cry’; the pinging back and forth between Pink’s heliumised falsetto and his lower range in the first third of the song; that phone ring giving way to one of the most wonderfully awkward bridges between verse and chorus that you’ll ever hear; and the bittersweet drenched-in-pathos sing-along that the song descends into, which positions it as one of the most perfect summer songs of recent times. It won’t please the lo-fi purists, but ‘Round and Round’ gnarled by recorder grot just wouldn’t work—this is a song that really needed to scorch out of the orange Los Angeles perma-haze.

Where many current artists so easily lapse into pastiche when drawing on certain signifiers from the past for inspiration, there’s something richer at work here, a depth in the songwriting, an intricacy and care to the arrangements, a sense that Ariel Pink has immersed himself in the music that inspired him and worked hard to turn it inside out and extract something new from it. This isn’t a few Eighties synth presets stuck through a distortion pedal—it’s music that resonates far beyond a simple aping of well established precedents, often managing to be funny, sad and thought provoking in the space of a single track. Now, if Pink can channel more of his past glories (primarily the compressed claustrophobia of the epic ‘Trepanated Earth’ from Worn Copy) into this new wax polished world, he may end up with his very own Tusk.