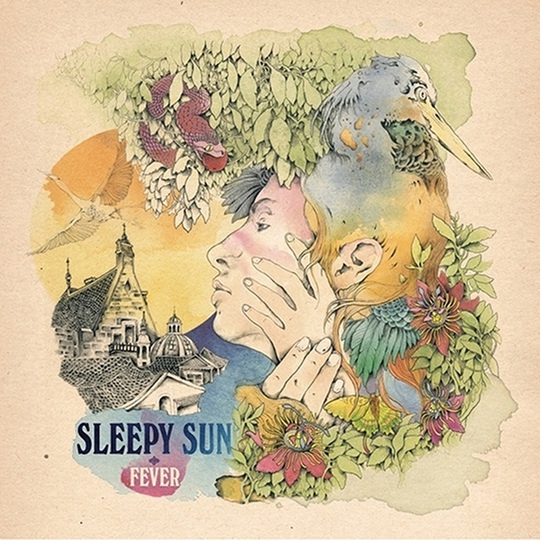 The likes of Black Mountain and Dead Meadow have done a lot to restore the status of dark, heavy, psychedelic rock, crafting epic, sludging riffs that appeals to those on the fringes of both metal and indie – where Black Sabbath meet Crazy Horse perhaps. What most of these bands have in common, apart from an appreciation of the fine art of facial hair – is that they hail from some of the lesser-known musical melting pots – Vancouver and Washington DC – almost as if they’ve been playing this stuff in isolation since a killer party in 1969, and no one’s told them that music has moved on in the meantime.

Sleepy Sun follow a remarkably similar path to these bands, but with one big difference. They hail from California - the Sunshine State and a musical heartland, and perhaps most importantly, the natural home for this expansive, explorative style of music. Nothing screams San Francisco more than those gloriously meandering solos, or trippy lyrics about nature and black magic, while there’s no better soundtrack to a roadtrip along Highway 1 than some Jefferson Airplane, Buffalo Springfield or, at the top of the tree, the Dead.

So, they might have the heritage on their side, but what do Sleepy Sun offer that their predecessors and their contemporaries don’t? The truth is, not a lot. Black Mountain’s dark and light boy/girl vocals mixed with Sabbath-style riffs is a hard comparison to ignore. However, they do fit into this lineage with ease, providing their worth amongst such exulted company.

Fever, the band’s second album, picks up pretty much where last year’s debut Embrace left off. There’s solos, big foot-stomping riffs and spaced out vocals, and quite a lot of the tracks slip past the six minute mark without blinking a stoned, red-rimmed eye.

There is, thankfully, some evidence that the band are slowly branching out into other areas. It’s nothing massive, but the higher prominence given to Rachel Fannan’s sweet, folky vocals and some heavily rhythmic freakouts suggests that two of psych’s two key roots have been explored in more detail. Fever’s opening track, the shape-shifting ‘Marina’, puts all this up front from the off, harmonic vocal breakdowns contrasting with some blustery wig-outs before changing direction into a barrage of tribal drums and chants.

These fresher elements rise and fall in prominence throughout Fever – ‘Rigamaroo’ is a full on twisted-folk skip through the darkened woods, while ‘Ooh Boy’ is the lighter trip out of the other side. That more rhythmic, Latin element, so essential to some of Californian psych’s figurehead can be found whenever the band stretch out, unleash the solos and reveal their inner Santana.

Fever then, is an album with an audience already writ large. If the idea of ‘cosmic jams’ brings you out in a cold sweat, then this isn’t a record for you. But then, what on earth are you doing here? The band are called Sleepy Sun for goodness’ sake, and the closing track on the record is called ‘Sandstorm Woman’, and is a nine minute epic that moves at a glacial pace. Without hearing a note of their music, you could easily surmise that this is a band with a ‘great live show’ and whose members might not have had a haircut in a while. You might also suspect that there’s a fair few other bands around Santa Cruz or Southland that are ploughing a similar furrow.

However, there’s a reason that it was Sleepy Sun that have caught the attention - they do what they do so well. They did it on Embrace, and now they’ve done it on Fever,. So where can I catch them live, man?