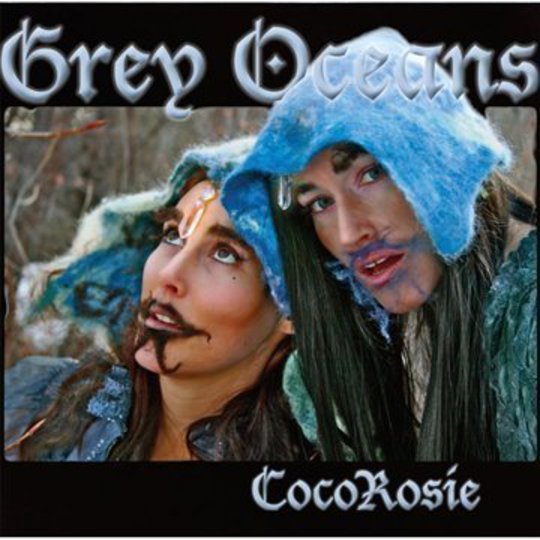 Listening to the fourth CocoRosie album, Grey Oceans, it seems apt to wonder where the dividing line occurs between ambition and self-indulgence. Just how much distance is there between Kid A, and, say, the work of Genesis? Cocorosie have always trod a path of stubborn individuality, often encompassing a child-like innocence and a simultaneous desire to pick away at the scabs which sit delicately over taboos. The fearlessness of the sisters in their creative vision has probably won them more fans than haters; David Byrne and Anthony Hegarty are among their higher profile admirers. How far, though, does the goodwill stretch? How many people, if they are being honest, would say that everything after La Maison De Mon Rêve has been interesting and sporadically great, but some way short of being music enjoyable from the regions below the cerebral cortex?

And so it is with Grey Oceans, another mixed bag of a record which inspires thought more often than love. CocoRosie’s usual mongrel mix of styles and ideas is present throughout; ‘Trinity’s Crying’ sounds like the main riff is lifted straight from the FM3 Bhudda Machine and has some other weird found sounds and gubbins before Sierra breaks out a half-operatic vocal. ‘Smokey Taboo’ starts off with a slow tribal beat and some ethereal synths and unfurls into Bianca doing her double-tracked nursery rhyme rapping thing, which by now you doubtless know if you either love or hate. Interestingly, she reveals that she is “afraid of sharks, but not the dark”. Quite. Actually, snarky asides about lyrics notwithstanding, the opening brace are decent songs, but nothing more unfortunately. ‘Hopscotch’ is a much more satisfying mix of drum ‘n’ bass beats and languid vocals from Sierra, alternated with a vaudeville musical-esque chorus about hopscotch from Bianca. The ability to make such ridiculous combinations work to any listenable degree reminds you why CocoRosie are afforded the creative leeway to make so many less enjoyable experiments.

‘Undertaker’ is a baroque piano-led lament featuring a sample of Bianca and Sierra’s mother singing in her native Cherokee, which the girls apparently found in a box of her things they were going through. It’s another track that's hard to get worked up about, but the piano is put to better use on the title track, which has the main piano riff sparsely accompanied with cello and intermittent wails from Sierra. Bianca does a good job of reigning in her eccentricities for once to deliver a straight and heartfelt ballad (though about what I am afraid I have absolutely no idea however). ‘The Moon Asked The Crow’ is a surreal mixture of classical tinkling on the Joanna with jabberwocky lyricisms from Bianca, all accompanied by a juddering hip-hop bounce. ‘Lemonade’ appears to be a nakedly autobiographical depiction of the sisters’ early childhood, beginning with a slow fanfare and a light techno beat before steering the chorus back to the musical theatre territory flirted with earlier on ‘Hopscotch’. ‘Gallows’ and ‘Fairy Paradise’ are instantly forgettable before closer ‘Here I Come’ rounds things off on a high note; a fantastical combination of a Devo-esque new wave beat with dream-like torch singer vocals about rape in the meadows and brambles in winter slapped on top. Like all of the best moments on Grey Oceans it sounds absolutely garbage laid down on paper, but it works in spite of its towering ridiculousness.

So after the outré highs and lows of Grey Oceans have played their last syllable, it’s hard to know what to think of it, apart from being slightly underwhelmed for the most part. The standout moments of ‘Hopscotch’ and ‘Here I Come’ stick in the mind, but when they come they sound very much isolated by the quality of the songs surrounding them. For all their faults, the world is undoubtedly a richer place to have a group like CocoRosie out there doing what they do and getting modest attention for it. So much richer in fact that even an album which errs heavily on the average feels more interesting than it has any right to.