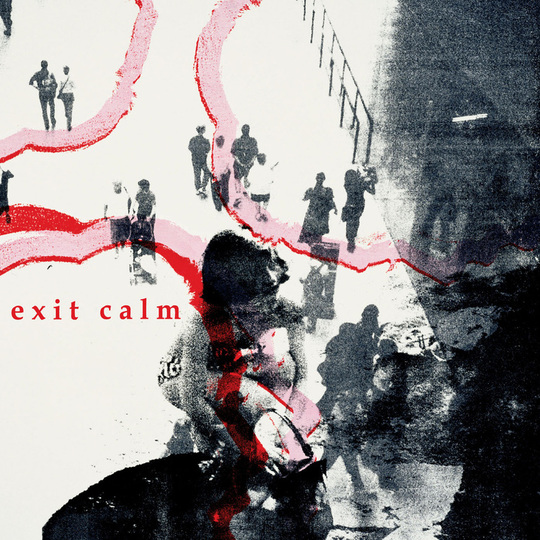 "The past and future don't mean a thing, this moment's the only place to be". Not my words, but those of Exit Calm frontman Nicky Smith before the outro of former single 'We're On Our Own' explodes in a cavalcade of blistering effects-laden guitar. In many ways, that line could be taken as a literal summarisation of his band, an outfit whose undoubted nods of appreciation to a wealth of sounds from previous eras have helped create one of this decade's most prodigious, yet out of kilter anomalies.

Despite possessing one of the most consistently dazzling live shows this scribe has witnessed in many a year, Exit Calm find themselves in a somewhat unenviable position before their first long player has even hit the shops. Written off by many critics as Verve soundalikes or worse, they've had to endure something of an uphill struggle just to get to this stage in the first place. Despite forming as far back as 2006 from the ashes of the vastly underrated Lyca Sleep, their slow burning brand of sonic annihilation hasn't so much attained merit due to word of mouth, but more forced its subjects into a state of submission, making sure every last note is devoured intensely.

Two well-received 45s later - the aforementioned 'We're On Our Own' being one of them - and finally, Exit Calm, their long-awaited debut is here. That both tracks off the other single are absent from the album proves to be an initial cause for concern, particularly in the case of 'Higher Learning', which I'm led to believe is available on the Japanese edition of the record. As a long-standing staple and in many ways pinnacle of their live set, it's conspicuous by its absence, profusely devaluing the album's overall impact, particularly towards the final third.

Nevertheless, at its peak, Exit Calm soars with a grace and panache that simply leaves its peers on both sides of the Atlantic for dead. With one foot in the shoegaze camp and the other firmly entrenched in post-rock's elegant stupor, Exit Calm have a tendency to mesmerise and astound in equal measure. The opening six-minute epic that is 'You've Got It All Wrong' may be the most dazzling, hairs-standing-on-the-back-of-the-neck introduction to a record since Interpol's 'Untitled' or even 'I Wanna Be Adored' before it. Rob Marshall's signature guitar sound may echo that of Nick McCabe circa A Storm In Heaven in part, but there's an incessant virtuosity abound here that lifts the opener, 'We're On Our Own' and forthcoming single 'Hearts And Minds' onto another plane all of its own making.

Not that Exit Calm are mere one-trick ponies. They can do reflective too, such as on the sensual 'When You Realise' or cathartic 'Don't Look Down', the latter straddling ballad territory initially before erupting in a melange of white noise excess at the finale, like Puressence having just discovered the joy of fireworks when joined in matrimony to a lit Swan Vesta or two. Better still is the album's dazzling midpoint 'Reference', Smith's nascent vocal delivery suited to the song's stop-start premise like a needle to a thread.

Sometimes, Exit Calm does have a tendency to wear its classic rock and roll influences brazenly on its shirt cuffs. 'Forgiveness' could be The Rolling Stones 'Mother's Little Helper' in a pro-tools inspired parallel universe, while a quick dabble wordplay with the chorus of 'With Angels' could turn it into Oasis' 'Slide Away' in an instant. Fortunately, neither really loses impetus or its own identity, messrs Smith, Marshall and the rhythm section of Simon Lindley and Scott Pemberton, not to mention producer Ulrich Schnauss all being too worldly wise to fall into any homage deficiency trap.

Where Exit Calm does forfeit momentum though is in its closing statement. 'Recovery' may be awash with guitars aplenty but it doesn't really live up to the nine pieces that have gone before. The pedestrian finale of 'Serenity' proves a disappointing anti-climax to a record that promised and delivered so much for the most part. Somewhat surprisingly, particularly to those captivated by the live shows no doubt, Exit Calm choose to go out on a whimper where a colossal bang would have sufficed, not quite elevating the record to the level of greatness its creators unashamedly aspire to.

Despite those flaws, Exit Calm is still a commendable record that can only herald a bright future for its makers, more importantly suggesting that today's good can be tomorrow's great.