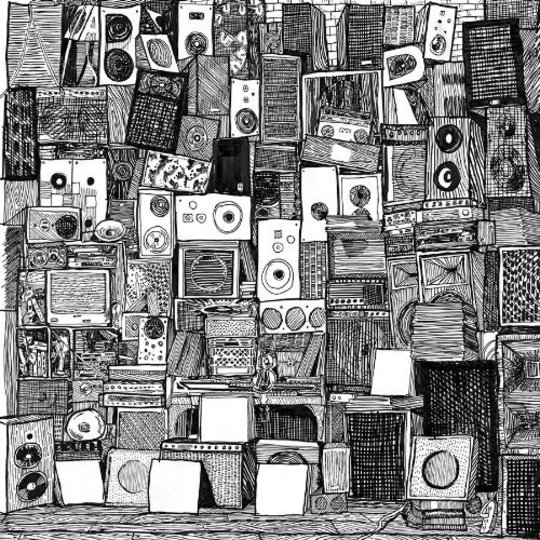 So began my only conversation with Ira Elliot, drummer with Nada Surf. Despite the none-too-subtle mockery, he turned out to be a real gentleman, and during our five minutes of quality time together we talked about their one big hit. He went on to talk about how, as a young band, they'd been forced to record some covers when the label hadn't heard a single on their next album. When the other members chimed in on the subject, it was pretty obvious that particular powerplay had stuck in their collective craw.

So there's a little irony to be found in the fact their first truly independent record is a collection of covers. if i had a hi-fi has been on sale at their shows for a while now, and you should know the thought of reviewing it has filled my heart with a special dread. After a couple of reasonable recent albums, a covers album did seem to be a tolling of the death knell. After all, when is there a better time to swallow your recording career? Has everyone forgotten The Spaghetti Incident? Covers albums are usually about a band running out of ideas, fulfilling contractual obligations while murdering a few standards.

But all you have to do to have if i had a hi-fi dispel those thoughts is to play it once. It comes out of the gate fast, with the opener 'Electrocution' dispensing prime power pop, fizzing with energy and hope. Their reading of Depeche Mode's 'Enjoy The Silence' encapsulates the album's approach. They cover it as if it had originally been written by The Cure in one of their pop moments, key and tempo up. It's almost unrecognisable until the chorus, and it is amazing how well the changes work.

But this is a well thought out selection (even the title is a palindrome), and all of the songs sound as though they could have been written by the band themselves. It's a real pleasure to hear 'Love and Anger' get the same treatment, Kate Bush getting channelled by yet another alternative rock band; but then that angst ridden version is exceeded by their Spoon cover. 'The Agony of Lafitte', originally written to give a lyrical kicking to a two faced Elektra A&R exec is played dead straight, and its inclusion serves as a nod to Nada Surf's own extended battles with the label.

If you really wanted to nit-pick - and you'd have to be a mean spirited bastard to do so - you could say that all the interpretations stay too close to the band's own sound. But when that sound is as strappingly dynamic as the one Nada Surf display here, that churlishness falls to the wayside quickly. This is how the covers album should be done, with tight technique and loving affection blending together to give the new versions life and bite.