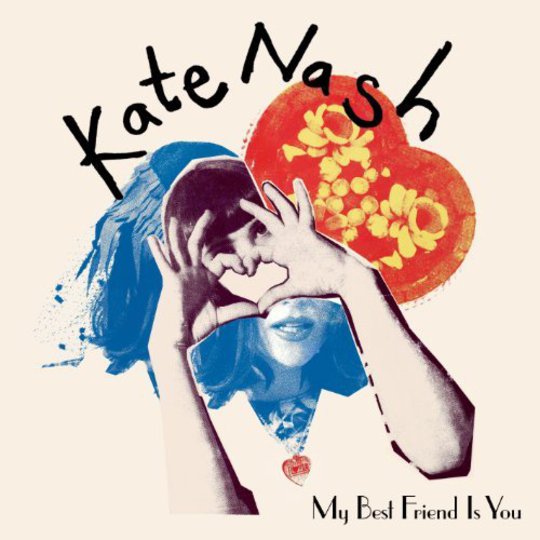 After the best part of a decade spent idly predicting such things, Kate Nash’s second album My Best Friend is You is probably the first record I've ever listened to and felt completely unable to work out whether or not it is likely to have any commercial or critical appeal. I am pretty certain the answer to both questions is likely to be either ‘loads’ or ‘none’, though I doubt even the most battle-hardened sociologist will ever exactly be able to tell you why, exactly.

So yeah: My Best Friend Is You includes a rap track. Well, ‘Mansion Song’ could probably be called a performance poetry piece, but anyway, it features Nash forcefully spitting such lines as “strip, strip, strip and shag, fuck, fuck, get fucked in drag”. It is Quite A Surprise. Is it an embarrassment? I don’t think so. There’s something about the shakey hysteria of her, ugh, flow – as if she can’t believe she’s doing this either, but is just so angry she has to get it out – combined with the weirdness of the backing track (some sort of detuned aria) that gives ‘Mansion Song’ a certain something.

One of the things it indubitably does is audibly rough up what is, in places, a very polished record. It would be no surprise at all if the string arrangements on My Best Friend Is You cost more than the entire budget of ‘Made of Bricks’, and while Nash’s vowels remains as cheerily roughcut as ever, it’s actually not that hard to imagine an Avril Lavigne type figure getting hold of something like the opening ‘Paris’ and pumping showbiz schmaltz into such lines as “you can do anything you want” or the handclap adorned chorus of “you’ll never listen to me”.

Indeed, the major confusing thing about My Best Friend Is You is that it manages to sound really, really major label and really, really indie, all at the same time. Nash’s voice is partly responsible, at odds with the smooth production, as, to a lesser extent, are her lyrics (surprisingly universal at times, pathologically antifolk at others – check out ‘I Hate Seagulls’ though, uh, probably not too often). Going back to those string arrangements – I’m guessing they cost a lot of money, because producer Bernard Butler seems to be the go to man these days for dynamic faux-Motown strings (very good they are too). But at the same time they could just be a bunch of talented string player mates, because more than a few songs have a passing resemblance to Belle & Sebastian’s early days – the second half of ‘Don’t You Want To Share The Guilt’ is particularly redolent of that babbling over a rickety orchestral swell thing that Isobel Campbell used to do so well. Other obvious indie touchstones are Yeah Yeah Yeahs – ‘I Just Love You More’ is virtually a pastiche – while ‘I’ve Got A Secret’s eerie echo would seem to have more than a dab of the works of Kristin Hersh. It’s not hard to clock a dab of Elastica and Sleater-Kinney’s softer side in there too.

My Best Friend Is You is, indubitably, rather daring for a mainstream pop album. Yet for all the Butler-begat polish, it’s hard to work out whether it really is a mainstream pop album. It's not a patch on Tigermilk or Fever to Tell, and it would be surprising if it was of significant appeal to B&S or YYY fans, but certainly there’s something very fun about Nash pottering around in those type of modes. The fact it might not be a hit – lovely single ‘Do-Wah-Doo’ and its superb “ba ba ba ba” chorus hasn’t troubled the charts – combined with the all over the shop musical palette suggests that it might not be a work that lingers for long. But it is fun - hook-filled fun at that - and while it’s hard to gauge how many people might love this record, only a singularly mean spirit could bring themselves to hate it. Carry on as you are, I suppose.