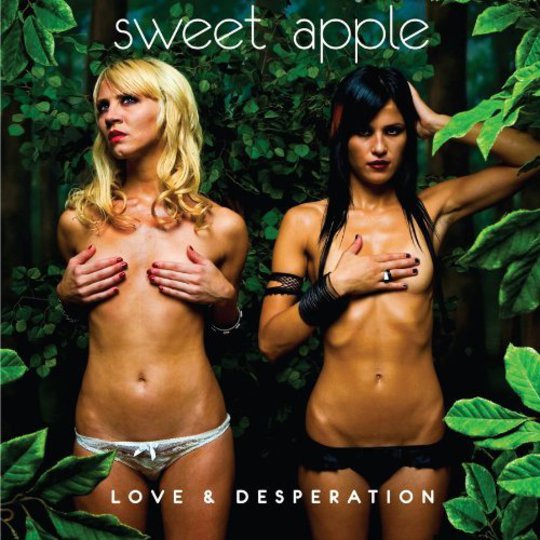 Sweet Apple’s Love & Desperation promises much. Firstly, there’s the fact that it’s the debut collaboration between J. Mascis, Dave Sweetapple from retro metalheads Witch, and Tim Parnin and John Petkovic from glitzy punk band Cobra Verde. Then there’s that album cover, which appears to be an attempt to recreate Roxy Music’s Country Life sleeve with a couple of Suicide Girls. Throw in the touching story of Petkovic writing much of this material while overcoming the death of his mother, add the excellent leaked first single ‘Do You Remember’, and it appears we’re onto a winner. Right?

Well, not quite. Anyone who had their interest piqued by ‘Do You Remember’ will likely find Love & Desperation to be a mixed bag. This isn’t necessarily a bad thing — that song is still a compelling mix of purge and absolution, with just the right dose of mud-thick riffing and catchy vocal rasping from Petkovic, which you rarely hear done so well outside of Sugar’s Beaster. But a whole album in a similar vein would be a trying proposition for even the hardiest flannel wearer. Instead, we get a number of musical diversions, some successful, others less so.

Naturally, Mascis gets to strip the paint off the walls with a suite of shivering solos, which is to be expected — you wouldn’t invite J to appear on your record and ask him to tone down the guitar pyrotechnics. That would just be rude. His influence is most pervasive on ‘I’ve Got a Feeling (That Won’t Change)’, where his brittle backing vocals and rippled guitar sound dominates, practically transforming it into a Dinosaur Jr. song. Even the title sounds a little Dinosaur-y, and while it’s a neat exercise and a reasonably affecting track, it doesn’t exactly sound like a stretch for any of the players. But that’s the nature of Sweet Apple — this is a casual project, put together in a short space of time, and played by a bunch of guys who act as a cipher for Petkovic to exorcise a few demons.

As such, Love & Desperation works just fine. We get to hear a lightness of touch to the riffing in ‘Can’t See You’ (until Mascis cleaves an all-consuming hole through it with a trademark white-light guitar solo, natch), a spot of grungy balladeering amid the undulations of ‘Blindfold’, and a little down-in-the-dark catatonic introspection on ‘Dead Moon’. But the various attempts to try on different styles are only partially successful, and often make the album seem scattered and disjointed. The misguided journey into power pop territory on ‘Hold Me I’m Dying’ and ‘Crawling Over Bodies’ are the twin low points, with the former veering close to an Americanised version of Britpop also-rans Dodgy. And no one needs that in their lives.

The album closes with a Screaming Trees-lite mash up of folky leanings and propulsive rock mush on the unremarkable ‘Never Came’ and a summery stroll through ‘Goodnight’. But at this stage it’s likely most people will be eyeing up that one-two punch of ‘Do You Remember’ and ‘I’ve Got a Feeling (That Won’t Change)’, and heading back there with considerable haste. It’s not clear whether Sweet Apple is a going concern or whether the folks involved simply high-fived one another and headed back to their day jobs at the close of Love & Desperation, but it’s unlikely there will be a clamour for much more of this stuff. This is one for the ‘pleasant but unremarkable’ file, and it seems that’s all the band was striving for in the first place.