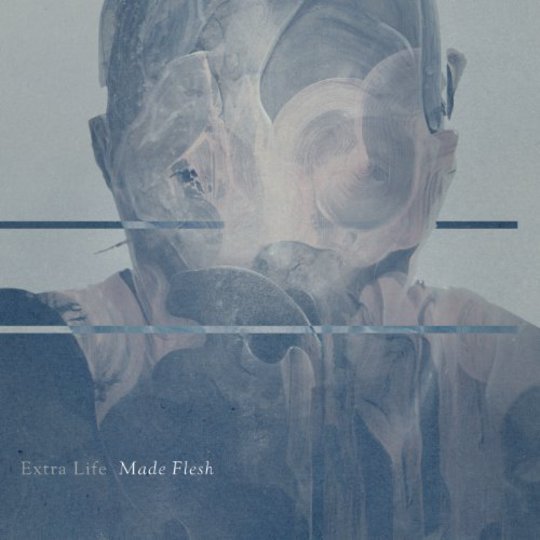 The second album by New York quintet Extra Life arrives at a time when more music comprised of ‘unlikely’ hybrids has risen to a sort of prominence than ever before. This is particularly true of music made by American bands raised on guitar rock and its underground network. At this point, the spectre of large-spectacled indie dudes jazzing their scrappy jams up with some earnest attempts at tropicalia or highlife must have pretty much attained cliché status. This, you understand, isn’t what Extra Life are doing on Made Flesh, a genuinely remarkable and fearlessly high-minded album.

Charlie Looker, the band’s chief composer, was a member of Dirty Projectors – poster children for unlikely hybrid indie, you might suggest – on their Rise Above album, and has largely operated in the grey area between noise and prog/math-rock. However, he also has a degree in music from Wesleyan University, and has had his chamber music compositions performed by various orchestras. That Made Flesh comes off like an attempt to tie all of Looker’s musical points of interest together on one 43-minute disc, and that it isn’t a preposterous folly, renders it one of the high points of 2010 thus far. If you encountered Extra Life’s debut, Secular Works, when it landed two years back, it’ll give you a ballpark notion of what occurs here, thanks to its reliance on highly unusual time signatures to bowl along songs informed by electric folk, Seventies prog rock of the Canterbury variety and classical chamber music. Made Flesh appears informed by all of this – but also the more ostentatiously slow and dramatic exponents of doom metal (Melvins or Khanate, for example); contemporary opera (most obviously in Looker’s melismatic vocals and heavy reliance on repeated words and phrases in his lyrics) and, perhaps, the excess through success that Joanna Newsom has been able to employ of late. If this album gets written about to the extent it deserves, it’ll be interesting to see if Newsom is often invoked, if only because harpist sirens and doom-riffing metallurgists rarely get spoken of in the same breath.

‘Voluptuous Life’ is the most frantic song of the album’s eight by some distance, drummer Nicholas Podgurski being given a sweaty workout that bears scant resemblance to his tasks later on. It lasts just over two minutes and fills each second with sound: alarm-shrill synth loops, fearsomely spiky guitar parts that could be seen as a continuation of the torch the Cardiacs passed to Nomeansno, and Looker’s words, unnervingly peppered with “spasm, spasm, spasm” and spilling “it” over necks and lips. This isn’t the last time that we’re treated to the frontman’s arsenal of sexual implication, either.

Distaste and disappointment are themes that loom large as lust: ‘The Ladder’, a King Crimson-ish pummeling of staccato riffs, seems to be written from the perspective of a man left behind by someone he once mentored, whether in a parental or friendship context. ‘Head Shrinker’, an air-light piece of jazz-folk which sounds like ‘Venus In Furs’ at its beginning and end, is a broadside towards a sullen and spoiled teen (“Fancy lad, fancy lad / How did you blow your inheritance, fancy lad?”) bolstered by a great and amusing video. There’s probably a thematic link between the boy depicted in the clip – a straight-edger in a Youth Of Today sweater – and Looker’s unflinching self-analysis on ‘Black Hoodie’, where he counters recollections of his youthful shyness with the admission, “I’m still a kid”.

It’s highly likely that any prospective listener will have at least one point where the whole Extra Life edifice topples, and matters feel gauche and improper instead of audacious. Personally, this arrives on the otherwise lovely ‘Head Shrinker’, which includes the lyric “wet-petalled like a vagina” (a line Looker repeats, naturally). The climax of ‘Easter’, meanwhile, finds Looker reacting vocally to the music’s building, feedbacking fervour by breaking from his default mode of controlled, dignified intonation. “Increase my heart so motherfucking silently!” seems awkwardly out of character, detracting – only slightly, granted – from a song that in other respects achieves intensity through precision.

Looker’s voice is not going to be to everyone’s taste, and will probably put many people off Extra Life who might otherwise have found much to embrace here. Still, this hasn’t stopped other recent dealbreakers of note – Newsom, Dave Longstreth, Antony – from achieving a barely predictable success with complex and idiosyncratic music. Made Flesh isn’t likely to have an equivalent reach: it’s on a smaller label with less promotional muscle, and its crashing appropriations of metal (especially on the epic closing track, ‘The Body Is True’) are probably going to be a bit much for your Uncut-subscribing End Of The Road-attending sort. It deserves every bit of acclaim it gets, though.