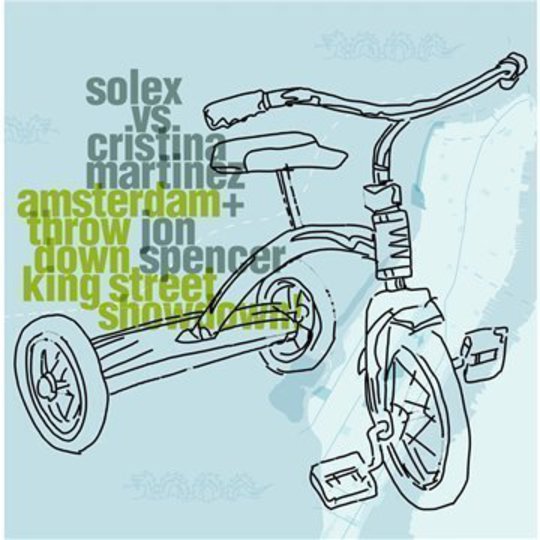 God damn it, the news is bringing me down. An election fought between a barely distinguishable pack of charlatans and obscurantists is slouching unavoidably toward us. There are 27 million people in the world who lost their job last year. Meteorologists are ‘postponing spring’ and predicting more snow. I need to learn that 24-hour rolling news is a convenience, not an endurance challenge.

Maybe I could learn something from Elisabeth Esselink. She found herself jobless when the record shop she ran in Amsterdam was forced out of business, but she didn’t fall into a deep existential malaise perpetuated by Huw Edwards at Five O'Clock. Instead she looked at all those unsold records and decided to weld them together to make a record so upbeat that one revolution could prove the forecasters wrong and bring summer on early.

Esselink, trading under her alter-ego Solex, made her name as a producer in 1998 with Solex vs. the Hitmeister. Using a battered sampler and an 8-track, she showed a magpie-like skill for merging the best bits of obscure records and her own vocals to produce a fresh sound, laden with chaotic beats. Three more full albums followed, along with a really rather excellent cover of Pavement’s ’Shady Lane’. However, not much had been heard from her since 2005, aside from turning up on a Go! Team album. The closure of her shop seems to have provided her with the impetus to get back in the studio.

For this new record she’s recruited husband and wife team Jon Spencer and Cristina Martinez. The couple met in quintessential sleaze rockers Pussy Galore and went on to form Boss Hogg together. These were noisy acts, dominated by loud guitars, and a world away from Solex’s blissful beats. Physically at least they’ve stayed a world away, but the magic of the internet allowed Solex to add their American recordings to Amsterdam Throwdown, King Street Showdown!. The meeting of the two sounds creates a funky collage, a party album that blurs the smoky haze of Amsterdam with the rattle of CBGBs-era New York.

From the moment the filthy drums and wobbly bassline of ‘Bon Bon’ groove out of your speakers, swaggering and curling their lips like louche lotharios, it’s clear that this is not an album that takes itself too seriously. Martinez’s vocals are high and pure, providing the irresistible momentum that Spencer punctuates with hipster yelps. Despite his cocksure attempts to inject this album with machismo, Spencer is really playing a supporting role here. Solex and Martinez take it in turn to carry these songs, from ‘Fire Fire’ with its staccato exclamations to the looping psychedelic soul of ‘Galaxy Man’.

Solex’s sample-based style lends itself to the variety of vocalists. On ‘The Uppercut’, which surges along on her breathy lead, she is complemented by Martinez’s classy backing vocals. Spencer seems to be walking on the wild side and channeling the spirit of Lou Reed on tracks like ‘Don't Hold Back’ while on ‘Racer X’, Martinez sounds uncannily like Sheryl Crow circa The Globe Sessions. The album’s best moments are when its tongue is in its cheek. ‘Aapie’, a Spencer-led song about monkeys, is utterly infectious, while more highpoints are provided by MC Mike Ladd. ‘Action’ and the wonderful ‘R Is For Ring-A-Ding’ are slices of lazy, laid-back rap reminiscent of De La Soul or DJ Format.

The album enjoys itself so much it sometimes forgets to change gear and ends up motoring along unspectacularly. It’s also a record heavy in nostalgia, from the stolen beats to Spencer’s atavistic blues vocal tics. But the bottom line is that it’s a fun record. I’d say that’s definitely good news.