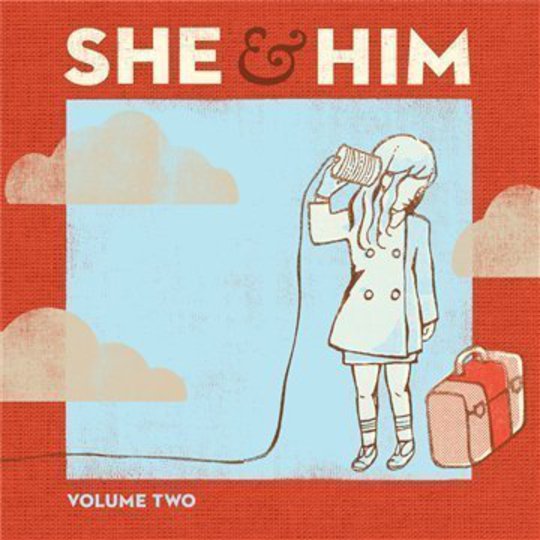 Anyone who has seen the video for She & Him’s latest single ‘In The Sun’ (video) will know that they are a band who live on a diet of joy and fun. Like a cooler version of Britney Spears' ‘...Baby One More Time’ the short sees Zooey Deschanel endearing herself to the last few indie boys who have not fallen for her, singing and dancing her way through school canteens and hall ways. Watching on is her bandmate M. Ward (AKA – Him) looking awkward in his sunglasses until half way through when he lets rip on a killer surf guitar solo.

This spirit of carefree abandon set to Fifties diner milkshake romance is what lies at the heart of Volume Two, the second album from this most curious project. For the uneducated, Zooey Deschanel is an actress, who has been in such films as Elf and Gigantic, while M. Ward is a cultish solo star and member of Saddle Creek supergroup Monsters of Folk. Initially thought of as a vanity project for the pair, interest has risen progressively as Deschanel’s supporting actress roles (Almost Famous) have becomes leads (500 Days of Summer). Lots of eyes behind a lot of horn-rimmed glasses are on the pair as they unleash their second album onto the world.

Unashamedly nostalgic and yes, twee (a word that strangely remains a negative, despite fittingly describing a host of wonderful bands) Volume Two is a charming romp through joyous celebration and smoky vintage melancholy. ‘Thieves’ opens the album in fittingly retro style as Deschanel floats her vocals on a delightful melody, barely masking her broken heart. “That won’t stop me crying” she sings over and over as Ward’s bluesy guitar holds her tight, wiping tears from her eyes. It’s a neat preview of what lies ahead on Volume Two, an album that, when not jumping for joy, is baring its naked soul for all to see. This juxtaposition is confused further by the fact that Deschanel married this year. Her groom (Death Cab’s Ben Gibbard) is no stranger to audio heartbreak but it is surprising that someone with box fresh honeymoon photographs could write a song as dark as ‘Brand New Shoes’. Yet this rich vein of gloom continues at regular intervals from ‘Lingering Still’ to ‘If You Can’t Sleep’. The latter of these three in particular sounds like a barbershop quartet being led to the stocks – maudlin but in perfect harmony.

It is on the up that She & Him work best however. Producer and musician M. Ward doesn’t write lyrics for the pair, all songs come from Deschanel, but his precise sonic touch and clear love for the eras and styles Volume Two pays homage to lift the album from being a rendition to a stellar re-imagining. His honky-tonk piano gives ‘Don’t Look Back’ a feeling of escapism whilst ‘Ridin’ In My Car’ boasts some of the best slide guitar you will hear this side of… well when was the last time you hear slide guitar on a modern record? Deschanel’s love of country gives this album a jolt of fun too. Many of the songs speak a message of dusting yourself and moving on, cracking but never breaking. This Patsy Cline school of feminine strength gives the saccharine sweet ‘Over It Over Again’ and ‘Brand New Shoes’ a neat edge.

She & Him treat what could be needless and indulgent with care and soul. Volume Two will surprise and charm in equal measure. Here’s to Volume Three, Four, Five and beyond.