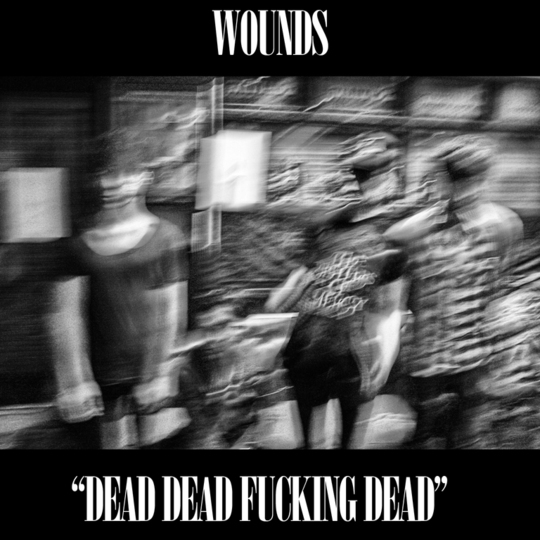 Well, you can't argue with a record title like that, can you? Hailing from Dublin (do people actually ever say 'hailing' in real life?), Wounds's first EP comes on the back of several glowing live reviews - one of which compares them to Minor Threat. Oh aye, really? Let's have a look see then.

Well, the verdict is that it's good. While blisteringly-paced industrial-tinged hardcore forms the basis for the seven tracks on Dead Dead Fucking Dead, Wounds liberally steal from the heavier end of the spectrum, notably math-metal and grindcore. All this is infused with a relentless energy and an occasionally Devo-esque jerkiness, which certaqinly makes you sit up and take notice.

They certainly know their way around a guitar, too, with hook after hook making you sit up, take notice and nod your head approvingly - particularly on record highlights 'Ugly Mouth' and 'Choke'. There's a nice line in sloganesque screamed lyrics, too, which is frankly quite a refreshing change from the endless unintelligible vocals that pervades the heavier end of the spectrum.

Before we go, though, special mention must be given to EP closer 'Dead Road', which is a fabulous curio. While it largely adheres to the admittedly successful formula laid down earlier in the record, the intro comes across like the evil robot version of U2 covering 'Radio Gaga'. Bizarrely, it works - and I get the feeling it was done with more than a smidgen of humour, which is never a bad thing.

These guys are definitely 'ones to watch': yes, the EP is occasionally a little derivative, and while every tune is strong, the moments of utter brilliance aren't quite as frequent as I'd prefer. Even so,this is a solid, inventive and above all distinctive record, and a really promising debut. I expect great things in the future from Wounds.