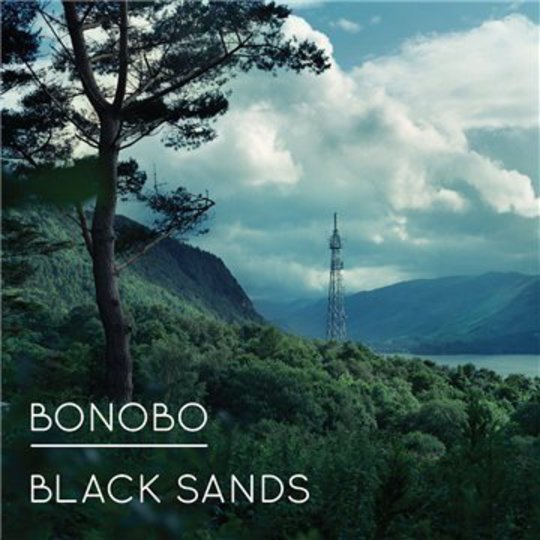 You know Bonobo, right? Even if you think you don’t, you do.

The simian soundsmith’s songs will have seeped into your subconscious via any number of adverts, video games and TV show soundtracks. Three previous albums of lovely, funky, stoner chill out fodder; always playing its part beautifully, always in the background. Black Sands, it seems, is Simon Green’s attempt to force his way into the foreground.

Opening with a prelude can’t help but grab the listener’s attention - this is rather the point of such - especially when it’s a stripped back strings and piano affair. Interesting - where’s he going with this? Just over a minute to hold your breath before the dirty dubby bassline of Kiara melds magnificently with the aforementioned instruments and a grin is allowed to appear. Ok, we’re listening… what else y’got?

A shoo-in as a single is Eyesdown, a warped, hazy, sun shimmer of a song. Something of a mix of styles, it’s as much dubstep as it is Balearic; imagine early Massive Attack holidaying on the white isle and you’re not far off. As with the rest of the record, it’s too down tempo to quite get your dance on, but it will make you want to go out all the same. For the sooner you go out, the sooner you’ll be back at home and sunk into a sofa, enveloped by its warmth, fairly smothered by its subtle, sultry sound.

That sultry sound is provided by Andreya Triana, the darling of the album who is to Black Sands what Sia was to Simple Things. She’s also the voice behind the other prominent pick on the album, The Keeper. Green has chosen his songstress well, her lungs throw it a life ring - inflated with emotional intensity - which saves it from being just another jazz-funk filler.

That said, there is still much that doesn’t stray so far from previous form, providing that heavy atmosphere he’s famous for, even if it is less insistent. Indeed, the cynical listener might look at his prolific guest appearance hit rate and be given pause: hang on, has this been produced for T.V.? It’s use in commercials a teensy bit too commercial? What came first, the instruments or the advert? On balance though it’s hardly surprising that he’s achieved such a tremendous take up by those seeking to flog their gear because whatever else it is, it is very cool; it drips the stuff from every pore. Gladly, Black Sands upholds this fine tradition.

Tracks like 'Kong' and 'El Toro' could easily be atmosphere music for Ironside or some such Sixties cop show - both are reminiscent of a Quincy Jones Blaxploitation era production. Headphones on and you’re the hero, your world a television set on mute; from nowhere you’ll notice a lengthening of your stride and an extra bounce in your step. Driving around the Bay area behind the wheel of a ‘68 Mustang GT looking for bad guys, this is certainly what would be rocking your Stereo 8.

And just when you think you’ve got the measure of the album; is that…why, yes, I do believe that’s a waltz. The arresting title track is served up last and with good reason; it’d be hard to follow. God damn all those lazy PR wankers who have turned ‘haunting’ into such a horrible cliché because, in that it sends a chill down your spine and follows you around relentlessly, this really is. Every time you think of it a tear will inexplicably form in your eye; perhaps the ghost of some lost love taking you by the hand and turning you slowly around the room. It may not be very Bonobo, but it is very beautiful, and – like much else on his latest long play - begs to be listened to. Please, step up to the front of the room, Mr. Green; you have our undivided attention…