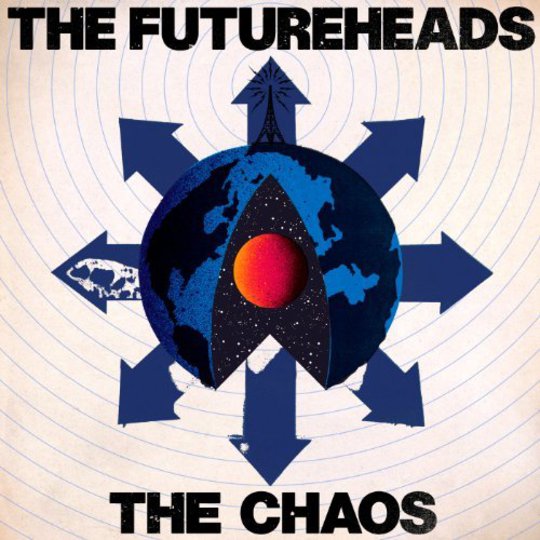 The second law of thermodynamics states that any process that occurs will tend to increase the total entropy of the universe. In layman’s terms, everything tends towards chaos. The Futureheads arrive at The Chaos four albums into their careers, but without any indication that they’re experiencing an entropic dispersal. The title itself is almost misleading when attached to an album of songs this surefooted, this carefully constructed from those familiar angular guitars and vocals thrown back and forth. The Futureheads are a notoriously tight band and producers David Brewis, of Field Music, and Martin Glover, aka Youth, let them get on with what they do best. There isn’t a recalcitrant note on this record.

The first thing you notice about it is its unrelentingly breakneck speed. Despite the fact that half the tracks don’t even reach three minutes, it’s an exhausting listen. The energy is packed densely into these songs like dark matter. There’s no time for a gentle intro. We get some ominous riffs, a countdown from five, and then they’re off. “Let’s travel at the speed of light, in a split-second we’ll be out of sight,” sings Barry Hyde, and you believe it's going to happen. This title track is full of oblique references to society’s woes and the refrain, “The Chaos. It’s everywhere but what’s it got to do with us?” seems less like an observation of thermodynamic certainty and more like a comment on an increasingly uncertain economic and political landscape. There’s a hint of disappointment in their generation’s political apathy as they sing, “We’ve been told a lie, but you still toe the line.”

They follow ‘The Chaos’ with two of the most straightforward pieces of pop confectionary they’ve ever produced. ‘Struck Dumb’ opens with the words, “Misery is a little line, or a little dash, it’s a subtraction sign. Happiness is a little cross, so if you’re feeling lost, use it to add it up.” They might be indulging in algebraic wordplay, but it’s only math rock in a lyrical sense. These songs are made of the sort of hooks that snare themselves in your brain for weeks and then make themselves so at home you’ll feel like they’ve been around for years. ‘Heartbeat Song’ is built around a pop-punk bass line you’ll swear you’ve heard a hundred times before but can’t quite place your finger on. Throughout the album melodies and lyrics return to lodge themselves deeper in your consciousness. The joy of repetition really is in them.

From there they blast through ‘Stop The Noise’, ‘The Connector’ and ‘I Can Do That’, driven on by a pounding drumbeat. The words “Triangles, straight lines” open ‘The Connector’, and provide a fitting image for music that still draws linearly from Wire and Gang of Four. The pace is still frenetic, and it’s around the end of next track ‘Sun Goes Down’ that the album reaches a terminal velocity. The song ends in a chaotic freak-out where those carefully constructed guitars and vocals collapse noisily around the band.

If ‘Sun Goes Down’ is the end of the first arc of the album, ‘This Is The Life’ begins the second in celebratory mood. On ‘The Baron’ they sing “Let’s dance as it hits the floor” and punk riffs haven’t been this danceable since Joe Strummer was the only white man in Hammersmith Palais. The pace is ever so slightly more relaxed on album closers ‘Dart In The Map’ and ‘Jupiter’, while tucked away at the end, in the best tradition of the secret hidden track, is ‘Living On Light’. It’s a cappella, like a righteous barbershop quartet, and serves as a triumphant send off to an album which wraps itself up inside forty minutes.

The Chaos is a return to the blistering form of their self-titled debut. The lyrics aren’t always great. For example, “Made more phone calls than a wealthy guy” from ‘I Can Do That’ catches my ear with a clunk, but their irresistible melodies and harmonies redeem them. They have always had an unabashed sensibility for writing three-minute pop songs and this record is stuffed full of them. The Futureheads have made exhilarating order out of The Chaos.