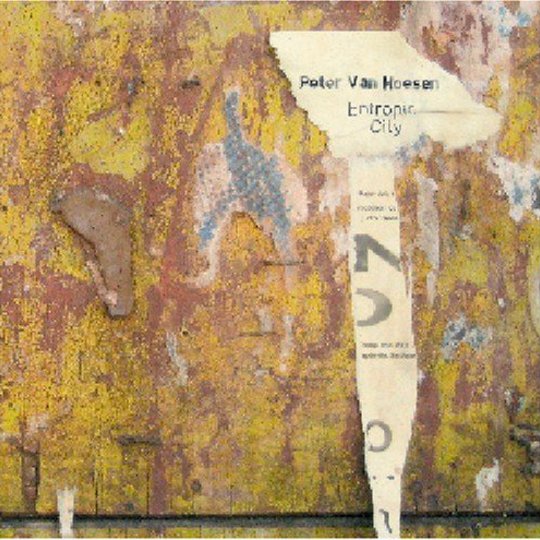 In the early Noughties it seemed, unlikely as it might sound now, as though minimal techno was going to take over the music world. With critics and bloggers collectively raving about labels like Kompakt and their blend of drawn-out, submerged rhythms and otherworldly electronics, it became very hip indeed. The fickle world of the internet has since packed up and moved the hype machine on but with techno artists like Pantha Du Prince making a splash, it seems like techno is back in force.

Peter Van Hoesen has been developing his own distinctive sound for a few years under various guises. His dark, bass-heavy sound offering a neat counterpoint to the anaemic minimal techno at the start of the decade, but a superb run of 12-inches in 2009 saw him adopt a sound not too dissimilar from the aforementioned Pantha. Van Hoesen too obsesses in creeping spaces, and the tracks here on Entropic City are allowed to stretch seemingly into infinity.

Opener ‘Into Entropy’ is the strongest of the set as it rides through relentless bass thuds and threatens to crack at the edge of the mix. The track hisses in its fabric and sounds more human for it. Van Hoesen allows a slow build, no crescendo and no flashing lights but the intensity of movement by the end is impressive as the track creaks open to allow softer textures and pinging delay to dovetail with pulsing rhythms.

The slow build textures and enveloping dystopic sounds are both the strong suit here and the album’s weak point. On the standout tracks ‘Into Entropy' and ‘Dystopic Romance’, the grandeur submerges the listener deep into a hypnotic, glassy world. But over the course of an entire album it makes for an intense listen, with little warmth or melody to break things up. The flourishes of melody and warmth on a record like Pantha du Prince’s Black Noise help glue the record together into a cohesive album. Entropic City lacks the edge to reward listening to the record as a whole entity.

It feels more like Entropic City is a collection of tracks, which isn’t that surprising considering the 12-inch nature of techno, and while that makes for a few highpoints, it also makes the album a slog, something that is easy to drift away from. Techno might be back in vogue and winning new listeners, but there’s nothing on Entropic City to woo a potential new audience, but it will be more than enough to excite the already converted and techno purists.