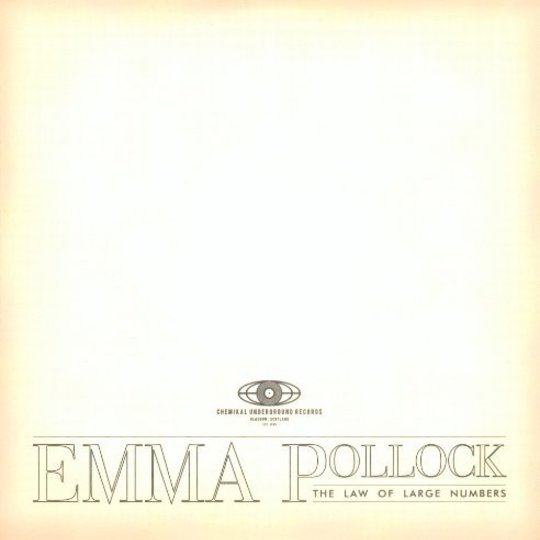 You can sometimes tell a lot about a record from its cover. Take the one above.

It’s deceptively simple, employing typefaces that hark back to another time, with weathered edges and precise alignment of slight elements to make a greater, considered whole. When opened up, the inner sleeve is layered up with a simple yet intricately accurate scientific diagram to denote who plays what on the record. It is calculated mathematics in action and yet simultaneously a work of art.

And it’s the perfect packaging for The Law of Large Numbers, the slow-burning but utterly delightful record that marks Emma Pollock's return to Chemikal Underground after starting her solo career with a brief dalliance with 4AD.

Almost every song has its own unique charm(s) that will continue to unveil themselves after hours of listening, with more of a ‘band’ feel to it than a solo effort thanks to the variety of instrumentation. Take ‘Red Orange Green’ with its timeless clock-ticking backbeat. Initially it’s the guitar line kicking in that draws your attention, but that subsides and gives way to your trying to work out which combination if the title lyric is coming next before all of these are rendered mere foreplay for the booming entrance of the (weirdly emotional?) piano at the two minute 16 second mark.

In fact these moments make every minute or so of the listening experience ever changing. Such as the horn outro of ‘Nine Lives’, the blissfully uplifting synths and bassline of ‘Confessions’, Pollock and Adem’s duet in the coda of ‘Letters to Strangers’ or the barren and haunting piano recital of the centrepiece track, ‘House on the Hill’. Rather wonderfully it also sounds like a record that’s entirely hers. There’s no need to mention which tracks here would be worthy of the Delgados because they are fully deserving of their own merit. That’s in no small part to her wonderful use of words; something Pollock has always managed very well is how to talk about what could be clichéd subject matters in effortless and slightly abstract ways.

‘I Could be a Saint’ for example is surely one of the most brilliantly twisted songs about differing views on a relationship ever committed to song. It seemingly deals with two people who have polarising opinions on their time together in an uplifting and beautiful way whilst being quite spiteful. Every line is an utter joy to quote, but special mention has to go to its chorus; ‘How’re you gonna break my heart / When you’ve never even made my day? / How’re you gonna make me pay / When I’ve given all I had away / And all of it I gave was true / And none of it I gave to you’. The continued insight she offers throughout is dealt with in an equally masterful manner.

It’s not quite the perfect record. The last two tracks before the second bookend ‘Hug the Piano’ snippet are something of a late lull, but that is being exceptionally picky.

Whereas Pollock’s 4AD debut was fairly charming and instant but a little slight, The Law of Large Numbers is the total opposite; a wonderfully simple, clever and loveable record initially masquerading as a complex and awkward one.