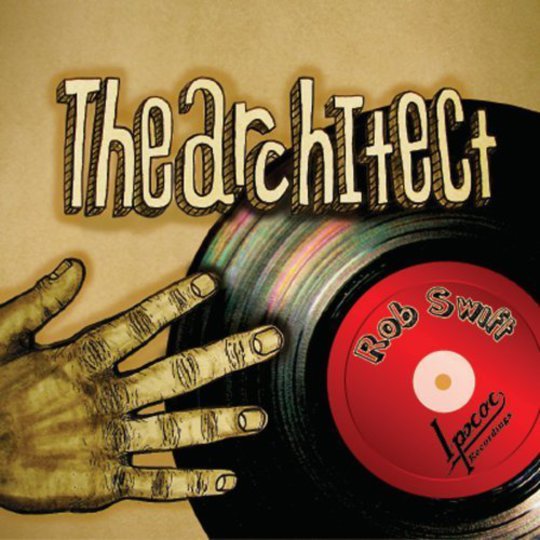 In the hands of Queens native Rob Swift, the master turntablist who has collaborated with everyone from Blue Man Group to Mike Patton, hip-hop is a pliable tool, a genre to be warped and moulded and parlayed into a musical force shorn of recognisable boundaries. He first tumbled into Patton’s orbit as a member of the X- Ecutioners, who went into battle with the singer on General Patton vs. The X-Ecutioners in 2005, and has since toured with Peeping Tom. The Architect firms up that relationship by becoming Swift’s first solo release on Patton’s Ipecac label, which gives him a chance to pull deep from his bottomless pit of beats and move away from his jazz-y roots, instead forcing a symbiotic relationship between the worlds of hip-hop and classical music.

This being a Swift project, it’s hard to identify exactly where those confines begin and end. He’s a master at finding the sweet spot where genres cross-pollinate and blur seamlessly into one another, and he makes it sound effortless, as if Brahms and the Bomb Squad were always destined to jam together. In short, he’s a DJ who can expertly take a square peg and make it fit seamlessly into a round hole, forging harmonious relationships in the most unlikely places. Swift isn’t the first hip-hop DJ to assimilate elements of classical music into his sound, but rarely has anyone attempted a project this grandiose. He may shy away from the term ‘concept album’, but that’s exactly what The Architect is, with MC Breez Evahflowin occasionally cropping up to remind us of the record’s central theme, and several tracks splintering into lofty three-part movements.

The album begins with a couple of introductory tracks that mash up elements of digital noise and ascending string samples, which get cut off just as they hit a fluid groove. This is a recurring theme on The Architect, as Swift rarely lets any of his songs settle into a recognisable shape or pattern, instead pulling them up sharp after just one or two minutes and moving on to the next track. Evahflowin helps form order from the chaos by surfacing on ‘Principo’, where his laidback rap lays down some ground rules (“don’t shuffle this LP”) and demonstrates the scope of Swift’s ambition (“the art form elevated to the next level of turntablism”).

The two three-part movements around which the album revolves, ‘Rabia’ and ‘Lower Level’, are where Swift really settles into his style. There’s a dramatic, horn-infused prelude to ‘Rabia’ that sets an ominous tone, but quickly changes with the dense Farfisa-like organ sounds and agitated scratching, which are coupled with bouncy string samples and chopped-up beats. Swift often keeps isolated string or brass patterns low in the mix, allowing them to be smothered by dense church organ noise, making it sound like there’s a phantom orchestra wriggling to get out of his turntables. It’s certainly very cinematic —the incidental music that brings ‘Rabia’ to a close could easily have been lifted straight from one of Bernard Herrmann’s Hitchcock scores.

‘Lower Level’ draws closer to the world of hip-hop via Kool Keith and Chuck D samples, but it’s quite brilliantly immersed in the classical world once more with some neatly worked agitated strings in the first third of the first movement, which become twisted and phased into oblivion before a stately blast of trumpet takes Swift’s listeners around the next beguiling bend in the road. The second part of ‘Lower Level’ is the pinnacle of the record, with Swift pulling on a time honoured genre signifier by working in the staple drum break from Led Zeppelin’s ‘When the Levee Breaks’ and tying it to a mesh of string samples that scream tortuously across the groove of the song, positioning the track at an intriguing crossroads between hip-hop’s past and possible future.

Swift keeps the genealogical plundering ticking toward the close of The Architect by turning to the timeworn ‘Rocket in the Pocket’ break to provide a solid foundation to ‘Sound the Horn’, which is otherwise constructed from a peculiar mixture of strings that simultaneously sound like they’ve been lifted from a gruesome horror feature and a Douglas Sirk melodrama. At the close of The Architect, just 35-minutes after it began, it’s initially difficult to process all the turns taken, all the styles covered, all the craft that Swift has poured into this record. Its brevity is its only flaw—it feels like the album is only just getting started when it ends, offering us an inkling of a skilled practitioner who has captured his art at a transformative moment, only to leave us craving so much more at the end.