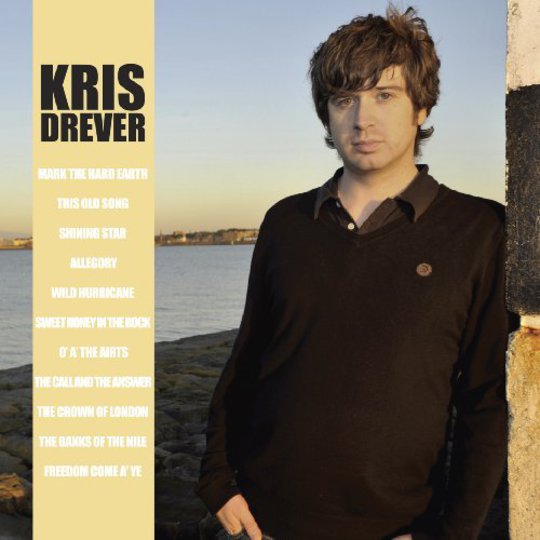 It’s been four years since Kris Drever has dedicated himself to a solo record, but he’s hardly been idle. In that time, rock fans might recognise him as ‘one of those guys who plays with Roddy Woomble’s folk trio’ (along with John McCusker), whereas the folk crowd might be more familiar with his efforts with Lau (along with Martin Green and Aidan O’Rourke).

For Mark The Hard Earth, Drever has assembled enough guest stars to rival your average hip-hop album. Aside from McCusker, who both played and produced, Drever’s guests vary from his projects. The who’s who of the folk world includes guitars by Ian Carr and duets with Karine Polwart and Heidi Talbot.

In traditional folk style, the album is a mix of established and new songs. The opening, title track is Drever’s sole writing credit, and speaks of the struggles attached to being independent and following one’s own path. The gentle drawling of the accordion counters the sparse guitars and softens the otherwise melancholic edge of the trundling rhythm. It is somewhat misplaced as an opener, as its solemnity sets a misleading tone for the album: the nostalgic ‘Wild Hurricane,’ might have served as a less grave introduction, with ‘Mark The Hard Earth’ appropriately falling into line as the ‘serious’ track in the middle of the album.

Drever’s voice is well-suited to the lyrical sincerity of the album but avoids being overly earnest. While sometimes a bit sentimental, Drever’s gentle declarations of loyalty are charming rather than trite (with a few exceptions: any song that compares a friend or love to a ‘shining star’ immediately scuppers the tune).

While it is Drever’s vocals that carry the record, it is the work of his players that really flavours it. Emotive though his guitar playing is (second only to his voice), the texture provided by the violins, mandolin and harmonium enrich the songs beyond what simple acoustic arrangements should accomplish. Compared to its easy-listening American cousin, traditionally styled folk has an energy that courses through it, that motivates and inspires.

The drama of Mark The Hard Earth isn't purely autobiographical, so it must come from story telling and strong imagery. Sea shanty ‘The Banks Of The Nile’ is the one proper duet, telling the story of the sailor/soldier leaving his girl behind, but its jaunty, accordion-led rhythm does not make an immediate impression. And truthfully, it’s been told a hundred times before. But if every new twist or rendition, no matter how far removed, can be told with genuine feeling, than it’s a story that bears telling a hundred times more.