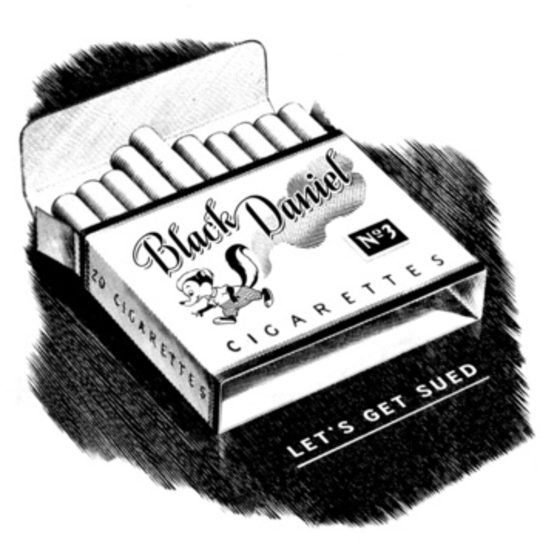 You've got to feel a little bit for Black Daniel. They made radio waves in 2008, played some dates with Kasabian, and things were going better than good. But just when there was a chance the world might have been theirs for the taking, their debut album got middling reviews, then promptly got stuck in a legal mire when Pinnacle went under. Lesser bands would have packed up and gone home, but to their credit Black Daniel ploughed on with their own inimitable synth flavoured garage pop ramblings.

The trio came back strong with a couple of really solid singles, the slightly leering and ramshackle 'Look Away Sancho' even making the cut for DiS' very own singles of the year '09 list. Unsurprisingly, it's a highlight of Let's Get Sued, with jangling guitars that are just the right amount of out of tune, scuzzy synth lines and a likeable shouty chorus. There's a couple of other decent tracks on offer here that follow the same Black Daniel single formula. 'Here Comes Caesar' sounds like The Animalhouse tumbling drunk through the living room of a party they've just crashed; 'Money' unwittingly evokes a partial memory of The Thamesmen's 'Gimme Some Money', getting rid of the mysogyny and amping it up with fuzz, icy keys and handclaps galore.

These moments aside, Let's Get Sued feels a bit thin on the songwriting side of things, and might well leave the listener wanting. The lo-fi production is a little too knowing, and the mix is a sometimes a middy-mire where bangs, crashes and clatters fight to be heard. Also, when the tempo drops, the funtime stops. The closer, 'Computer Hero', the longest song on the album still only clocks in at 3.54 but seems to last a lot longer, cheesy percussion and cheap rhyme pathetique stretching time in the worst way possible. But Black Daniel are a singles band, a party band, and a self-released, band-produced album was never going to tick all of the boxes. In drinking terms, they're not an expensive vintage wine that rests smoothly on the tongue, sipped in plush surroundings. They're a line of unknown multi-coloured shots resting on a dirty bar. And depending on personal taste, you can pay your money and take your choice.