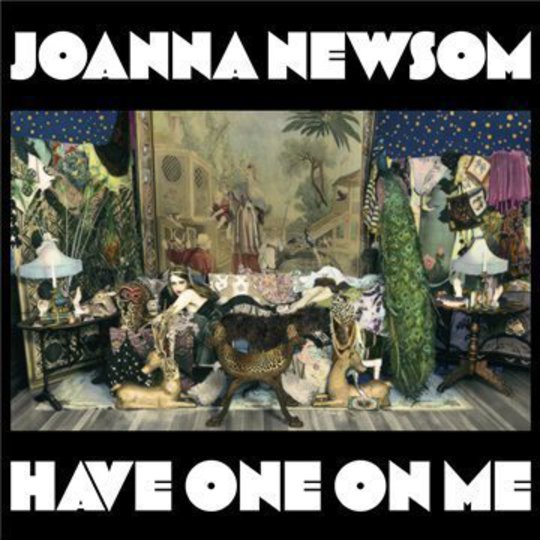 Joanna Newsom has been divisive since her playful and surprising debut Milk-Eyed Mender way back in 2004. There were those who couldn’t stomach the unique, rasping and almost saxophonic voice, and then, following the release of her second masterpiece Ys, there were those who couldn’t get on board with the wriggling, fantastical narrative and proggy structures. It almost seemed like baiting the critics when Joanna Newsom announced the release of a triple album, complete with tongue-in-cheek title Have One On Me.

The surprise is that her third album is potentially a game winner. Her once disconcerting voice is now winsome and technically much improved. And in her lyrics and overarching themes, Newsom has created a sprawling piece of work that should have universal appeal – for once you submerge into its depths the sparkling shipwreck at its core is that of heartbreak. It’s a breakup album.

Opener ‘Easy’ languishes in slow-moving strings and piano before opening up with rolling drums and tales of comfortable love. Like most of the first disc, it has a Seventies sun-blushed charm to it, the melodies and structure easier to digest than Ys’s parachuting, breathless structures. The writing is more immediate, and none more so than on ‘Good Intentions Paving Company’ which is almost a straight up pop song, with Newsom relaying familiar feelings of new love: "And the tilt of this strange nation/And the will to remain for the duration/Like a bump on a bump on a log, baby/Like I’m in a fistfight with the fog, baby". The song ticks in giddy motion, backed up by Newsom’s leaping vibrato, before suddenly changing pace halfway through. It lifts an already superb song to the skies, lilting gorgeously as Newsom sings "I feel I see everything/And am in love/With the hook/Upon which everyone hangs".

The first disc is the most immediate, its exploration of new love easy to take in, and exciting as it whistles through light-headed highs and turns of pace – the highlight of these is when 'Baby Birch' cracks open to reveal pummelling drums and breathless harmonies. But the meat of the album is found in disc two and three. The new love of disc one is replaced by a sadness that creeps through disc two opener ‘On a Good Day’ and becomes devastating by the time you reach ‘Go Long’.

Newsom’s talent as a lyricist is one of her strong points – paraded quite obviously on Ys, but at times on Have One On Me her poetry is breathtaking. ‘Go Long’ is biting as it hangs a black cloud over the second disc; a line like "What a woman does is open doors/And it is not a question of locking/Or unlocking" is so far removed from 'Good Intentions Paving Company's playful "How I said to you/Honey, just open your heart/When I’ve got trouble/Even opening a honey jar". It drags the album into spurned lover territory with more in common with Bob Dylan’s Blood on The Tracks than the sun-wilted melodies of the first disc. The car that sped down the right-hand lane in 'Good Intentions Paving Company' is replaced on 'Go Long' by a man ‘Backing slowly, slowly down the road’.

Disc three is more detached, it’s not squarely pegged in the thick of romantic drama, but consumed with reflection, Newsom’s harp – which doesn’t take a starring role for much of Have One On Me, is centre stage once more, the languid freefall structures that surround it are the closest to Ys as anything on the three discs. The swirling flutes that sweep up the harp on 'Kingfisher' sound almost baroque – harking back to the middle-ages fantasy that adorned the cover of Ys. The album – or should I say albums, because it is easier to take each disc on its own terms – ends with 'Does Not Suffice', and its gorgeous pianos soundtracking a bittersweet goodbye as Newsom sings of "The tap of hangers/Swaying in the closet/Unburdened hooks/And empty drawers/And everywhere I tried to love you/Is yours again/And only yours". With that the album ends, the attachment severed musically, and lyrically, leaving only emptiness.

As far as break up albums go, Joanna Newsom has created an arresting metafiction, a hugeness that pulls you in like new love, and becomes unbearably sad, the weight of silence after two hours is heavy and cinematic, and like the best rangy films you carry it with you long afterwards. It’s a testament to Newsom’s art that she can pull a listener so deeply below the surface, those depths are so obvious (three discs worth) that it marks this album as a grower, as something that won’t fully unravel in the mind for quite some time. For now, it is a stunning and ambitious piece of work; one for the ages.