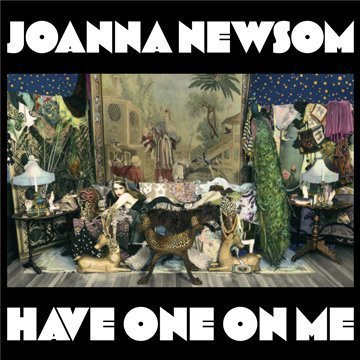 Joanna Newsom - Have One on Me

A stunning and ambitious piece of work; one for the ages.»

the extraordinary joanna newsom returns with a compelling three album set. it consists of 18 songs spread over three discs and clocking in at a running time of more than two hours. the album sits somewhere between 'ys' and her 2004 debut 'the milk eyed mender' with flowing strings and woodwind next to traditional rock instrumentation and more exotic additions such as balkan tambura and bulgarian kaval. the album has depth, width, colour and length. standouts are 'baby birch' which nudges 10 minutes and captivates the listener with nothing more than voice and harp, before blossoming iunto full folk-rock splendour and 'does not suffice' which has a gospel-inflected progression - it's flat-out gorgeous and heavy with sadness. joanna newsom stands alone as one of the most compelling and ambitious artists of our generation.
description from www.roughtrade.com