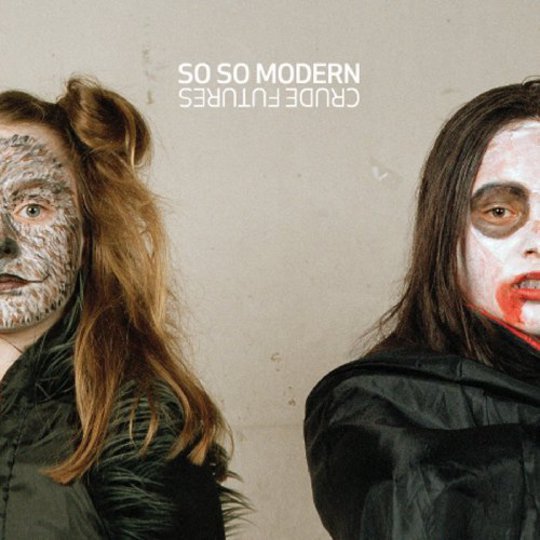 When did you first hear of So So Modern? The band who first appeared on radars between 2006 and 2007 have an online paper trail seeing them emerge alongside ¡Forward, Russia!, Klaxons and Foals. Having released a singles compilation in 2008 (featuring the excellent ’Upgrade Your Chassis’) it comes as something of a surprise to discover that they are only just getting around to releasing their debut album proper. The band have not been laying idle for these past few years however, having spent more time on the road than Cormac McCarthy, touring constantly and playing over 200 gigs a year. This has bred a unity and tightness in the band that drives and informs ‘Crude Futures’ from the offset.

Lying somewhere between Blood Brothers style post hardcore and Errors trippy and strung out take on techno, Crude Futures is a relentless listen, battering senses at every opportunity. So So Modern are not a band who do subtlety very well, but they have the art of throwing everything but the kitchen sink in down to a fine art. Synths are laid on top of walls of guitars and lots of drums to create a sound akin to Spector’s Wall of Sound suffering a glitch in the Matrix. Tracks like ’Dendrons’ and ’Holiday’ make use of linear structures as the vocals flail and yelp their way through proceedings adding a sense of urgency and panic.

Perhaps inevitably, Crude Futures is let down slightly by sounding quite dated. The whole jerky-funk-punk thing has pretty much died a death, asphyxiated by its own highly strung guitar straps. Whether So So Modern wanted Crude Futures to be a distant memory by the time we hit 2010 or not, the fact remains that the album feels like something you might dig out from a pile of half-forgotten CDs rather than a vital piece of new music capturing a moment of the time and present.

Having said that there is certainly room for growth here and the band hint at a looser, more progressive sound that could well pay dividends in the future. ‘Dusk and Children’ sits in the middle of the record acting as a makeweight around which everything else revolves. It’s a drawn out affair, but one that doesn’t outstay its welcome. Deep and foreboding it is accentuated by electronic stabs and a series of rolling, processed sounds. This range and combination of sounds points at a direction So So Modern can use to both highlight their clear technical ability whilst still sounding relevant and fresh.

Crude Futures is the sound of a band with a good future but one who need to remove the shackles of their past in order to progress. Tight and proficient, all it really lacks is a truly magical moment.