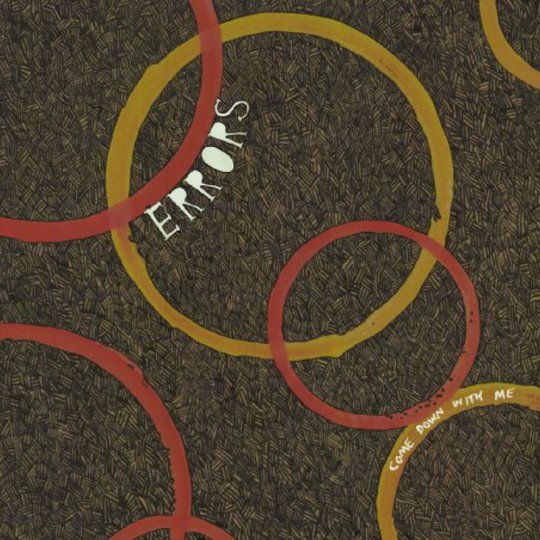 Second album syndrome. It’s a phrase that denotes some obligation to evolve out of a bracket that is almost always doomed to fail. It defines how bands and artists are so readily pigeonholed through their first efforts and will never achieve anything greater. With Errors’ first full length, It’s Not Something, But It Is Like Whatever, they (arguably) managed to get rid of that ‘syndrome’, despite the fact that it was their full length debut. The much adored How Clean Is Your Acid House? EP and Salut, Francesingle had already sated the appetite for a fair few, despite these pieces existing as morsels before the main course of the album. While INSBIILW was doubtless a solid effort, it never felt as if the step was made into their touted status as a rebuttal to the likes of Battles or 65daysofstatic.

Come Down With Me, on the other hand - Errors' actual second album, can hopefully evade such concerns. The initial furore over the band had passed, leaving them breathing space to expand upon their acclaimed work. The time spent in what they refer to as ‘the freezer’ in recording this album has obviously focussed them; the result is a joy throughout. Opener ‘Bridge or Cloud?’ is a prime case in point. It’s quintessentially Errors, but has a triumphant march-like feel that was never recognised as missing in the first album. ‘A Rumour In Africa’ plays on the staccato combinations of their canon and is a wonderful reminder of just where Errors have come from, but it’s following track, ‘Supertribe’, that ups the ante for the rest of the album.

Without meaning to sound facetious in this comparison, it really is pretty similar to Calvin Harris at his emotronic best (of course without his trashy, self-felating demeanour over the top). The track is a modern pop gem, and goes to show further that the band's unwarranted tag of math-rock/post-rock is almost completely unfounded. What they have honed so perfectly ('Supertribe’ being a leading example of this) is their song-writing. Such ability for an instrumental band to plant tunes into your head always proves that you have something quite special on your hands.

Of course, they still wear their influences on their sleeve, but how they manipulate these influences with such an admirable and indomitable honesty has to be noted, trivial or otherwise. A tour with label daddies Mogwai last year has obviously souped up their sound plenty. ‘Antipode’ makes them sound like their ‘soul brothers’, swinging from the swoony melee of synthesisers and simple guitar lines into a stop-start bass driven beast. This near-homage is also apparent in the chant laden ‘The Black Tent’, which acts as an ode to some forgotten memory of themselves. It’s the album’s sole forlorn moment, but its tenderness is tangible because of its loneliness, and only amplified by the Stone Roses-esque chords from closing track ‘Beards’.

A new-found confidence is impossible to ignore and you’d be hard pushed to find a track on here that doesn’t stand out on its own merits, but what makes the experience of listening to it in full so joyous is just how cohesive it is. There are few tangents in comparison to their first album, where at one moment they could be a solid angular rock entity, the next an electro mash up behemoth. Come Down With Me has solidified the band as their own entity; it has forged all of the disparate pieces of the past into something evergreen. There is no inclination to pander to any preconceptions of yore and this has now, undoubtedly, made Errors the force they always threatened to be.