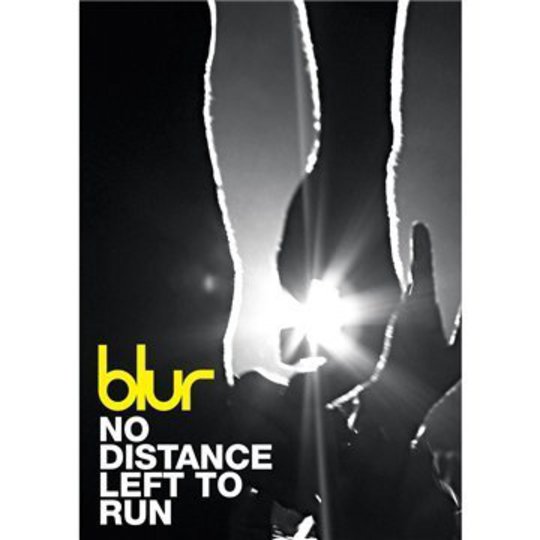 So the bad thing about major labels is that every single employee - down to the cleaner - is a cynical, money grubbing pervert who hates music, believes themselves to be above the law, and has committed a Faustian pact – just for the shits, like – that requires them to exsanguinate one kitten per day in order to maintain their squalid excuse for a job.

The good thing about major labels is that even in these troublesome times, they’re absolutely minted, and let’s be honest, money is awesome and lets you do lots of brilliant things.

No Distance Left To Run, Parlophone’s new documentary about Blur's summer 2009 reformation, manages to combine these two sides admirably. On the one hand the average village idiot could suss out that the emergence of both this film and last year’s Midlife album represent EMI’s best attempts to wring some product out of the painfully short reunion. On the other, Ross McLennon’s cinematography is absolutely ravishing and was quite clearly worth the bob or two it surely cost. The quasi-intimate footage of the band is nice enough, but it’s actually the more staged things that really click here, lush, colour-saturated shots of suburbia and English mundanity that chime perfectly with band’s own aesthetic. At one point there is a heart-stoppingly beautiful piece of steadicam footage, focussed on an anonymous stretch of British motorway. It’s really just an establishing shot for a Graham Coxon interview on the band’s tourbus, but it’s immensely poetic, the aquamarine wall of the bus glinting seemingly immobile in the dull summer sun, while squat little cars beetle lazily around it.

As for the real ‘substance’ of the film... well it’s not essential, but it’s not bad. The reunion was ostensibly a personal thing foremost, and while I suppose you could be cynical about the band revisiting old haunts with a large film crew in tow, nobody at the shows in question would deny the fact that this really meant something to all concerned, particularly poor, dear Damon. In any case, shots of Blur playing intimate shows at Goldsmiths and the East Anglian Rail Museum provide nice framing points for a film that settles into a cosy structure of documentary about the reunion, interspersed with a chronologically ordered reflection on the band’s career and body of work.

Herein lies the problem: to really tell Blur’s story thoroughly, you’d need something in the ball park of – at the very least – a half hour-long doc per album. As the ultimately far more compelling Starshaped attests, with Blur the story behind every record would make for a pretty solid Greek tragedy, and with seven albums to consider, No Distance Left To Run feels a bit cursory when considering the band’s past. With the exception of Damon being a little evasive about his alleged heroin use (fair enough, really) the band are open in their interviews and come across well, particularly the delightfully mad Coxon. But if you grew up with Blur or have read Stuart Maconie’s solid 3862 Days there’s little new here, with even the anecdotes about the split and reformation – Coxon hiding from Albarn in London Zoo, the two renewing their friendship over an Eccles cake – now pretty well-worn. There are still plenty of magic moments – notably Alex James going slowly mad filming a series of foreign TV idents – but in many ways No Distance Left To Run’s chief strength is the watchability with which it compiles familiar anecdotes, rather than adding anything new to the Blur saga.

In fact the most striking thing about the film is how symmetrical it all feels, that these four individuals are putting their affairs as a band and as friends into order. There isn’t a word of discussion about new material or future live dates, even in the negative. If you're going to ascribe a purpose beyond high quality cash in, it does feel that if No Distance Left to Run is stretched, it’s because it’s here to serve not just as final document of a tour, but a whole gleaming career.

[NB. The second disc is a solidly-shot amalgam of Blur's Hyde Park gigs: it’s a wee bit heavy on festival footage cliché, particularly with regards to the overhead crowd shots, but once again crisp, colourful cinematography that concentrates for the most part on capturing the band’s faces and emotions. A bit of a shame it wasn’t the more emotional Glasto show, but nay mind, and the songs sound brilliant, confirming it wasn’t purely nostalgia that will make the reunion go down as such an incandescent affair.]