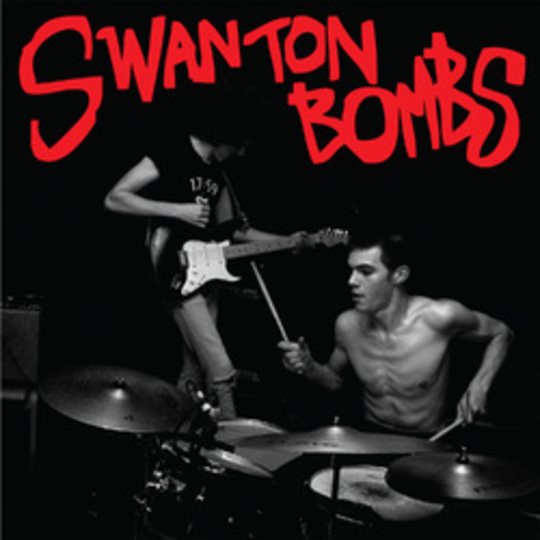 Apologies in advance to Swanton Bombs if I struggle to review Mumbo Jumbo and Murder without resorting to wrestling analogy and metaphor. But then such is your fate if you find yourself written about by a now not-so-closet former professional wrestling fan, when you’ve decided to name your band after a high-flying 'finishing manoeuvre' perfected by former WWF/E tag team, and real-life brothers, Matt and Jeff Hardy (if any of you’ve been nodding along enthusiastically and started searching for this, then congratulations; your adolescence was as lame as mine.)

Unlike fellow wrestling name-droppers Let’s Wrestle however, the band name is as far as the two-piece go in referencing 'sports entertainment'. Signposts for their brand of garage scuzz are in fact rather more sombre: they were the main support on what would turn out to be the late great Jay Reatard’s final UK tour last autumn. Whilst not entirely similar to his sustained scratchy intensity, there are still traits of the recently departed musicians’ aesthetic that crop up on this debut LP - namely the belief that “if there’s fewer of you, just shout louder”. Last year they were the perfect foil to Reatard; their primal blasts of cacophony bouncing off the walls of basement venues up and down the land. This energy remains equally abundant on record.

It starts with a 90-second wig out, setting the tone for much of the album. Dominic McGuinness’ giddily enjoyable riffs hurtle down on the listener from a great height, whilst Brendan Heaney’s snarling rhythms rise up to meet him head on in collision. We don’t get any vocals until second track ‘Who’s Asking?’, where McGuinness’ imparts the kind of rasp that bares the scars of one too many whisky-fuelled evenings- by the end of the closing ‘Tanks’ his larynx sounds ready to conk out on its owner. Unsurprisingly this fits in well with Swanton Bombs' unashamedly rough and ready sound. And by rough and ready I don’t mean the lo-fi sandpaper abrasion of many of America’s punk-influenced output over the past couple of years; the London pair’s ramshackle sound doesn’t rely on that production - in fact, apart from pressing ‘record’, there doesn’t actually seem to be any sound tweaking done at all. This couldn’t be any more garage rock if they’d got their parents to walk in halfway through every song to shout at them to “turn that damn racket down.” Things work best when ‘Bombs keep the pedal firmly on the accelerator: ‘Calm Down’ is a three-minute riot, an early Cribs’ track but with more direction, whilst ‘Waistland’s’ guitar riffery cuts and jabs, an itch that refuses to be left alone.
It’s a shame though that more hasn’t been done on the mixing desk; dynamics vary little and thus McGuinness and Heaney occasionally falter in giving us the big climatic pay off their free abandon deserves. Take ‘Doom’ for example - a fearsome hook that then isn’t really built upon and eventually has to slink around again sounding just a little more wearisome. Swanton Bombs aren’t always quite sure what to do next and so often resort to repetition; something that more advanced production might’ve made less obvious.

Thankfully the pair work best when they don’t have to think too much, and for the most of Mumbo Jumbo and Murder they don’t, throwing themselves into their gruff clamour with relish (and let’s not forget, with the two barely into their twenties, the omens for album two are good). They’re certainly not the most varied act going, but for 40 minutes of unbridled frenzy they do very nicely indeed, a spinning heel kick straight to the gut (shit, and I was so close.)