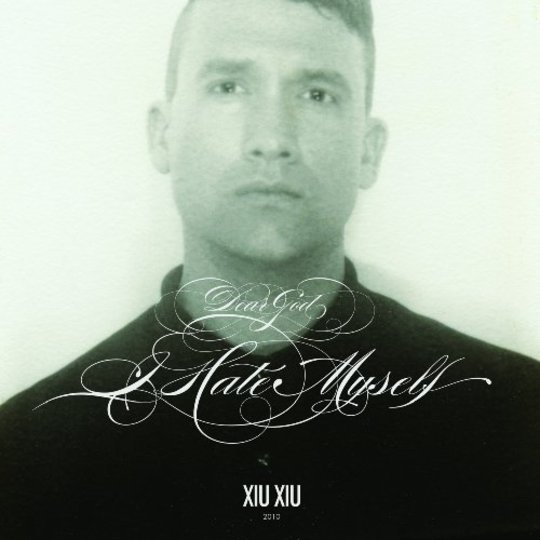 “If you are expecting consolation / I will become outrageous / If you expect me to be outrageous / I will be extra outrageous.” Considering this is the sort of statement that would have most sensible people instinctively bunching their fists if they encountered it on a Big Brother audition tape, or a profile on a dating website, it’s a brave move from Jamie Stewart to bust it out in the first minute of the seventh album by Xiu Xiu, the Californian band generally thought of as Stewart’s muse. ‘Course, if you are familiar with Jamie Stewart you will probably think it fair to say that he specialises in what you might call brave moves; and if not, well, you can see what he’s called this record.

While this opening track is unrepresentative of what’s to come – it’s driven by acoustic guitar with a side order of Nirvana rifferama, and is one of the least arresting moments on the album – one wonders if Stewart didn’t kick off with it to be deliberately jarring. Most of the remaining 11 songs on Dear God, I Hate Myself are built around sequencers and beats rather than guitars, and while they’ve by no means called off their flirtations with dramatic bursts of noise, they are only intermittent over the 38 minutes. ‘Chocolate Makes You Happy’ is, perhaps more than anything else Xiu Xiu have ever committed to disc, a real-deal goth-pop song. It’s still weird as all get out, its spine being a wheezing lo-fidelity keyboard melody and an overworked drum machine; but even its tweepop elements can’t disguise a song that, in essence, could have served The Cure well around their Eighties commercial peak.

Although we aren’t treated to quite this degree of catchiness on the rest of Dear God…, the basic formula of glum vocal drama-rama coupled with oddly buoyant rinky-dink rhythms is revisited a few times. ‘Apple For A Brain’ is one of three album tracks primarily composed on a Nintendo DS, the title song and ‘Secret Motel’ being other other two, and it’s pretty much a go-to definition of musical bathos: as upbeat and cartoonish musically as lyrics like “So ugly for a boy / Dispraise for what I am / A cartoon with no friends” are self-parodically wallowing. The title track concludes with the sort of excessively rude synth distortion one might otherwise expect to hear on a record by Boys Noize or someone. Its self-reflecting sense of the absurd is backed up by the lyrics; Stewart might take himself incredibly seriously, but there’s no way anyone paying even cursory attention could mistake him as humourless. “I will always be nicer to the cat / Than I am to you,” from the song’s first verse, is a textbook example of a lyric that anyone could have written, but no-one else thought to.

By most accepted yardsticks, this is still not an easy album to listen to. Its component sounds are less abrasive than much of Xiu Xiu’s catalogue, but the manner in which they’re arranged is crucial. In addition to the sonic peculiarities already mentioned, a squealing violin part will often come steaming in to disrupt what order may have been created. Stewart’s proclaimed yen for outrage doesn’t extend, on this occasion at least, to besmirching a folk song’s grand old tradition; ‘Cumberland Gap’, an Appalachian ballad over a century old, only lasts ninety seconds but is enacted in faithful folk style, with Deerhoof guitarist John Dieterich providing some musical backing. (Greg Saunier, Deerhoof drummer, additionally keeps time on most of these songs.)

As with almost everything else Xiu Xiu have done, influences are thrown in and bounced around with the mania of a Take A Break prizewinner’s trolley dash. As hoary a line as this might be, though, the result ultimately sounds like little aside from Xiu Xiu. Moreover, there almost certainly isn’t an indie-breakout hit waiting to happen here, for all the inroads into actual commercial success made by other bands on nodding terms with the avant garde in the last year or so. (A video consisting entirely of band member Angela Seo sticking her fingers down her throat until she hurls is unlikely to be the key to a chest of crossover treasure – this is, however, exactly what Xiu Xiu recently made for ‘Dear God, I Hate Myself’ the track.) Not only does this not really matter, as regards one’s enjoyment of this perversely enjoyable album, but you get the impression that Jamie Stewart would bristle at the idea that his music might generate blithe consensus approval.