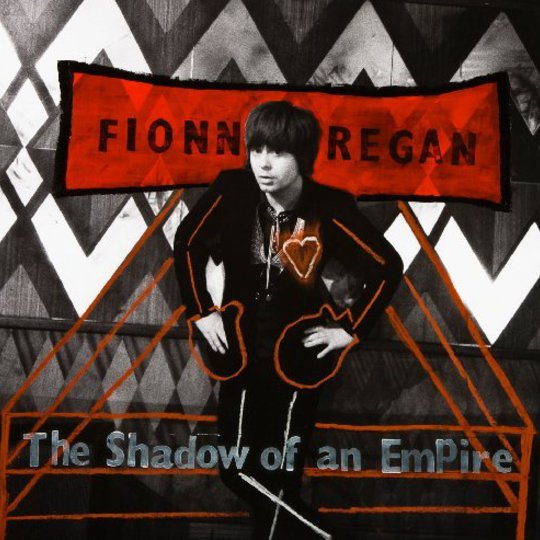 The three year gap between the release of The Shadow of an Empire and Fionn Regan's Mercury-nominated debut The End of History has seen the Irish troubadour undergo something of a transformation, or perhaps more accurately a mutation. His latest offering is yet another self-produced effort, yet this may not have been the case; with the backing of US label Lost Highway, Regan and producer Ethan Johns holed up in a Somerset barn to work on new material, which the label deemed unsatisfactory for their market, encouraging Regan to have a change of producer and scenery (Nashville). The result was that Regan walked away and set up with a tape machine in an abandoned factory in County Wicklow in his homeland stating "a collection of songs tailor-made and polished for play on certain American radio formats was not what I had in mind".

With that in mind it's then rather striking to note that the sound of The Shadow of an Empire is in fact one steeped in the traditions of American folk and blues rock. Folk Hibernia this is not. The great American figure(head) of Bob Dylan in particular looms large over the record, as it did on his debut, and even the aforementioned 'mutation' recalls Dylan's great moment of musical heresy in the mid-Sixties. Yep, this is Regan gone electric! Not quite such a bold move these days, but it makes for an more immediate and varied album than Regan's debut.

As the opening track, 'Protection Racket' is fairly representative of the album as a whole, although its lilting Vampire Weekend-esque intro serves as something of a red herring, the verses propelled by a tumbling tom-heavy beat and scratchy electric guitars as Regan snarls righteously about how "Theses big companies are giving us the squeeze". This could get preachy but Regan tempers it with a sharp humour and melodic effortlessness. There are several hints of an anti-authoritarian streak running beneath the surface several tracks; the unrelenting bluesy riffage of 'Genocide Matinee' is a vehicle for Regan's 'Subterranean Homesick Blues'-style stream of consciousness lyrics, lines like "Strip me bare like the scapegoat, the primate praised the public vote" being rendered all the more visceral for the rapidity with which they roll of Regan's tongue. 'Catacombs' possesses breezy fingerpicked acoustic guitar effectively bolstered by some meaty electric riffs on the chorus and needling high notes. In contrast to album opener the chorus of "Let's take it outside the kids are sleeping, I'll pay you to do me some damage" suggest an altogether more personal subject matter, reinforced by a reference to the king of honky-tonk heartbreak himself, Hank Williams.

The staccato chug and barking backing vocals of 'Coat Hook' are further proof that there are plenty of hooks (pardon the pun) in Regan's new rock-inclined direction, while 'House Detective' shows it to be an ideal vehicle for Regan's fiendish wordplay, despite the wonky guitar licks bordering on goofy. However, the highlights of The Shadow of An Empire are those songs which would sit more easily on The End of History. The paddling fingerpicked chords of 'Violent Demeanour' give it gentle and disarming momentum against which the piano chords of the chorus jar dramatically, a change in dynamic which allows Regan to demonstrate the expressive range of his voice, developing from quaver redolent of Colin Meloy to a rather more exasperated wail. 'Lines Written In Winter' finds Regan at his most sincere minus the blues/folk-rock facade that rather blights tracks like 'Little Nancy'; its most touching moment is by far is the admission of love and defeat: "I want to tell you that I'd make your bed, break it up and I'd do it again, so it feels like you've been here, but I know that you're not, coming home". The 'Lord Help My Poor Soul' also benefits from a stripped back approach; despite being less direct lyrically, the bare and ominous verses give Regan room to utilise his voice more emotively, while guitar and mandolin punctuate the chorus without shattering its delicate poise. The title track (and album closer) if not gospel, has a plangent melody that conjures up divine imagery and is a spirit raising conclusion to the record.

It is on these tracks, where Regan lays himself bare a little, either through a confessional lyric or purely through musical pathos, that he distinguishes himself from his influences. There are interesting lyrical details and musical ideas to be found in every track on The Shadow of An Empire, but too often they are obscured by the shadows of Regan's influences. The result is an album that, whilst boldly stepping in a new direction for the Irishman, fails to be as personally distinctive as his more direct debut. It has the feel of something of a transitional album in this respect and as such it's still a pretty impressive collection where the quality of the tunes never really falters, but where musically/lyrically/stylistically the highlights are the exception rather than the rule.